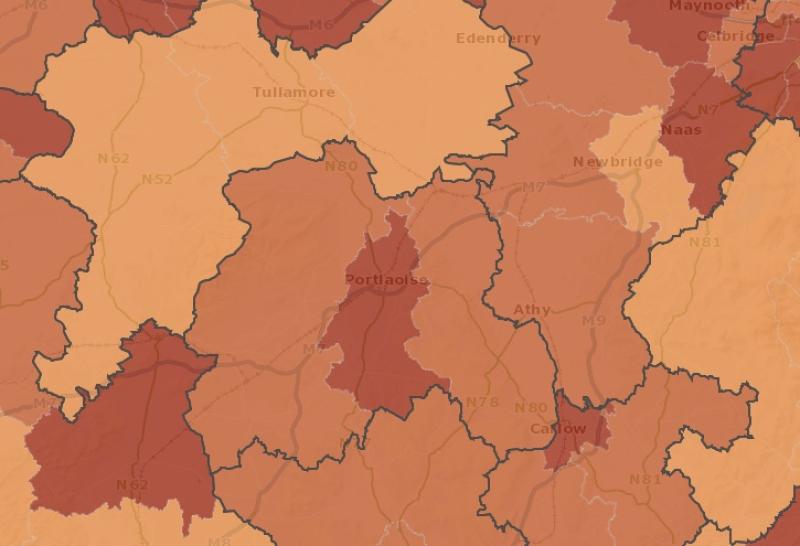 The incidence of Covid-19 in Laois has fallen in all districts but it continues to be above average in the most populated area.

There have been 85 new cases of Covid-19 in the central area of Laois that includes Portlaoise in the past two weeks.

This map provided by the Covid-19 Ireland hub shows that the incidence of Covid-19 is highest in the Portlaoise Municipal District area which runs from north to south, based on the 14 days from October 20 (the day before Level 5 began) to November 2.

The rate of infection per population is higher than the national average, at 267.3 per 100k population, compared to 228 nationally.   A week ago, Portlaoise had a higher incidence rate of 302 with 96 new cases in the previous fortnight.

The total population of the Portlaoise local electoral area is 31,794 people.

On the west side, the Mountmellick to Borris-in-Ossory Municipal District has had 32 new cases in the past fortnight. Here there is a much lower rate of infection, at 129 cases per 100k people. The district is less populated, with 24,807 residents over a much wider area.  A week ago the incidence rate here was 163.3 with 41 new cases in the previous fortnight.

On the east, the Portarlington Graiguecullen area is also showing a lower rate of cases than the Portlaoise Municipal District. There there have been 37 confirmed cases of Covid-19 in the past two weeks, a big drop from a week ago when it recorded 96 cases in the previous fortnight.

After more than a fortnight of Level 5 restrictions, case numbers in Laois have dropped. From October 13 to 26 there were 233 new cases here. But from October 20 to November 2, there have been 154.

There is some way to go to reduce to September rates. From September 8-21 there were 38 new cases in Laois and an incidence rate of nearly 45 per 100,000. This was deemed high at the time.

Yesterday November 5 seven new cases were confirmed in Laois, making it a total of 857 cases here since the first was detected on February 29.  There have now been a total of 64,046 cases in Ireland, with 1,933 Covid-19 related deaths.