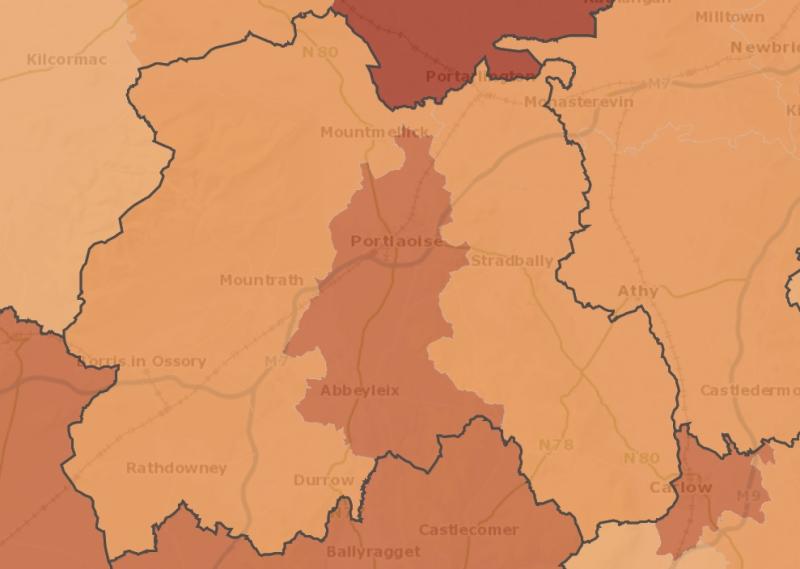 The most densely populated part of Laois around Portlaoise now has the lowest incidence of Covid-19 while the area the includes, Mountmellick, Mountrath and Rathdowney has the highest incidence for the first time after a rise in cases.

The latest Local Electoral Area (LEA) breakdown which is updated weekly on the Covid-19 Ireland data hub is based on figures in the 14 days from November 17 to 30. They also show that the incidence in the county increased on the eve of Level 5 lockdown measures being eased.

It shows that there were just 14 new cases during the two week period in the Portlaoise area. This gave a rate of infection of 44 per 100,000 population. This is down from 56.6 per 100k for the last period measured up to November 23.

However, the incidence worsened in the other two Laois LEAs.

The most concerning trend is found in the west and south-west of the county - the Mountmellick to Borris-in-Ossory LEA. The latest report shows that an incidence of 72.6 per 100 k on the back of 18 cases. This compares with 56.4 per 100k in the 14 days to November 23.

The figures from the three areas show that Portlaoise was the only LEA below the county rate in Laois on November 30 which was 55.5 per 100,000. The national rate in the two weeks up to the eve of Level 5 being lifted across Ireland was 88 per 100k.

The Health Protection Surveillance Centre (HSPC) reported that the county-wide incidence of the disease in the two weeks to November 23 was 49.6. This put Laois at the second-lowest rate of infection in Ireland.

Up to date figures published by the National Public Health Emergency Team on Sunday, December 5 reveals that the incidence in Laois is 55 per 100k on the back of 47 cases in the previous two weeks. The county has now the 12th best record in the county by county breakdown.

The past week has seen two days without any new cases but cases spiked on Friday due to a glitch in the HSPC computer system.

There have now been 1,005 cases in Laois since February.