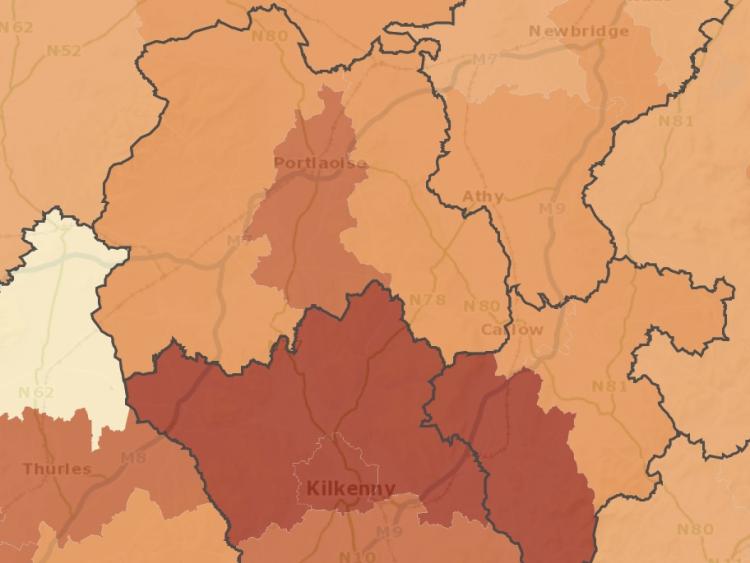 New cases and disease incidence have surged in Portlaoise with the lifting of Level 5 lockdown restrictions, according to the latest official figures

The latest Local Electoral Area (LEA) breakdown which is updated weekly on the Covid-19 Ireland data hub is based on figures in the 14 days from December 1 to December 14.

The data published on Thursday, December 17 reveals a rapid deterioration in Portlaoise while the situation has worsened to a lesser extent in the Portarlington and Graiguecullen area on the east of the county. Both are the most populated parts of Laois.

The situation has stabilised in the Mountmellick Borris-in-Ossory LEA where the incidence had worsened for the three previou successive recording periods up to December 7.

All three areas border north Kilkenny which has one of the highest infection rates in the country.

The incidence in the most populated electoral area of Laois fell to 40.9 in the two weeks to December 7 but has since jumped to a frightening 132.1 per 100k.

The situation has worsened in Portarlington Graiguecullen LEA in the 14 days with 23 new cases recorded yielding an LEA rate per 100k of  81.9 per 100k. There were 16 new cases in the previous reporting period yielding an incidence of 56.9. A total of 19 new cases were confirmed therevin the two weeks to November 30 giving an incidence rate of 67.6 per 100 k.

Things have stablised in the west and south-west of the county - the Mountmellick to Borris-in-Ossory LEA. The new figures show that the rate per 100 k is 72.6 on the back of 18 new cases. The previous two-week rater per 100 k of the population was 88.7 due to 22 more cases.

The district is less populated, with 24,807. It includes Rathdowney, Mountrath, Durrow, Castletown, Camross, Errill, Clonaslee and Rosenallis. It borders Tipperary and Offaly but also Kilkenny .

All three districts border the Castlecomer LEA in Kilkenny where the situation continues to worsen. It now has 305.3 per 100 k on the back of 72 cases in the previous fortnight.  The incidence is more than triple the national average for the Republic. There were 45 confirmed cases to December 7 yielding an incidence 190.8 per 100k pop.

The deteriorating situation in Portlaoise has seen the average Laois incidence rate rise in the two weeks measured.

The Health Protection Surveillance Centre (HSPC) reported that the county-wide incidence of the disease in the two weeks to December 14 was 84.7.

Up to date figures published by the National Public Health Emergency Team on Thursday, December 17 reveals that the incidence in Laois has worsened again.

In its daily statement, NPHET says a further 23 cases of the virus had been confirmed in Laois.

The new cases reported to the Health Protection Surveillance Centre on December 16 means that the incidence in Laois remains above the national average. It is now 141.7 per 100,000 on the back of 120 cases in the past two weeks. The national average rose to 94.2 per 100 k as the virus begins to spread again.

The latest figures push Laois higher into the top ten in terms of infection incidence.  During the lockdown, it had the second-lowest rate at one point.

Laois ranks below neighbouring Carlow and Kilkenny but above Offaly, Kildare and Tipperary. See county by county table at the bottom of this story.

There have been 1,115 Covid-19 cases officially confirmed in Laois since February.