BREAKING: Covid-19 remains high in Portlaoise, surges in Portarlington Graiguecullen and on the up in Borris-Mountmellick 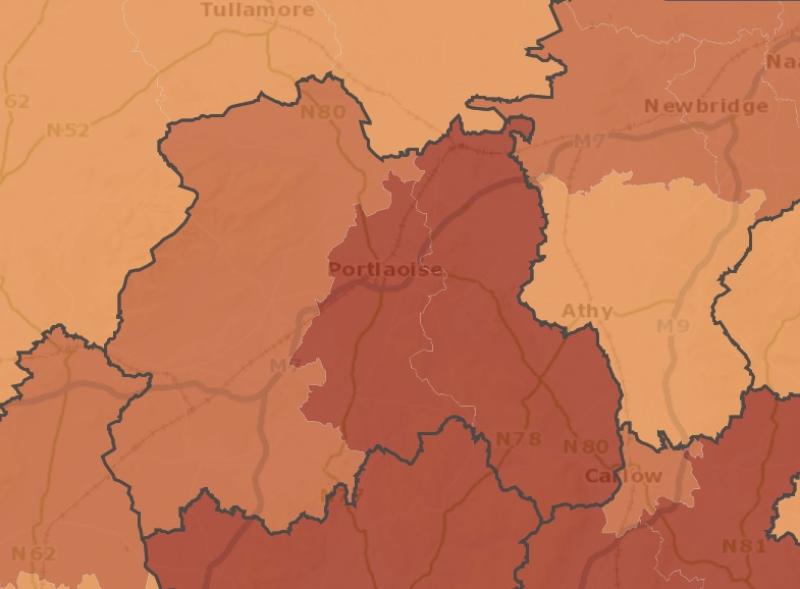 Local Electoral Area up to December 28 shows half of Laois in the darkest shade which means highest incidence.

Laois heads into 2021 in a precarious Covid-19 situation following publication of the latest figures which show the incidence rising in two fo the three local electoral areas.

The latest Local Electoral Area (LEA) breakdown on the Covid-19 Ireland data hub covers December 14 to 28. They show that two of the county's three districts have are now categorised in areas with the highest spread of the disease nationally.

Data published on New Year's Eve reveals the deterioration in Portlaoise has stabilised but the incidence and number of new cases remain high. Of more concern is that the situation has also worsened in the other two electoral areas.

The incidence in what is the most populated electoral area of Laois had fallen to 40.9 in the two weeks to December 7 when Level-5 measures ended but jumped to 289.4 per 100,000 in the period to December 21.

The incidence for the two weeks to December 28 remains at 289.4. This may be an underestimate as health authorities say testing reduced during the Christmas period.

The situation has also deteriorated in the western side of the county - the Mountmellick to Borris-in-Ossory LEA. While it is the least impacted by the virus of three Laois areas, there have, nevertheless, been 34 new cases in the past two weeks leading to an incidence of 137.1 per 100 k.

This is a stark contrast to the Laois incidence of 55.5 per 100 k less than a month ago on the last day of the October to November Level 5 restrictions. Just 45 new cases were reported in the two weeks to November 30.

None of the three Laois areas have hit the second wave high mark which peaked in October. However, NPHET and the Government are working on the basis that the third wave will be worse.

Up to date figures published NPHET up to midnight, December 29 show that the Republic's overall incidence rate has risen to 272.7 due to 12,987 new cases in the previous two weeks.

All three Laois districts border the Castlecomer LEA in Kilkenny where the situation continues to worsen. Its incidence rate jumped again to 475 per 100 k with 112 cases up to December 28. Part of Laois also borders Muinebeag LEA in Carlow which also has a high incidence - 287.9 per 100 k on the back of 45 new cases.