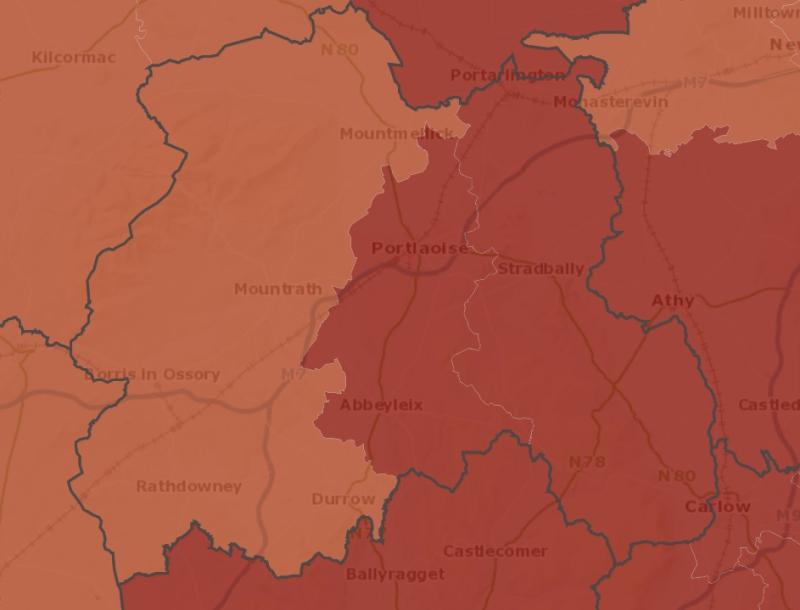 A Covid-19 spread rise in Laois is the result of an jump in Portlaoise's incidence while the spread has slowed in the Portarlington and Graiguecullen and the Mountmellick Borris-in-Ossory electoral area though a large number of cases continue to be confirmed in both.

The Covid-Data hub figures show that there were 343  new cases in the Portlaoise LEA in the two weeks surveyed. This compares to the 282 cases in the two weeks to January 11 - the previous recording period. The jump in cases means the new incidence has risen 1078.8 per 100,000 population up from 887 per 100 k.

The spread of the virus had been relatively stable in Portlaoise until the past seven days. However, the latest escalation puts the electoral area into a category of LEAs in Laois, Offaly, Kildare, Carlow and Kilkenny which are disease hotspots. (see map above).

It is also the only local electoral area in Laois where the disease spread continues to rise.

The incidence has reduced in the Portarlington Graiguecullen LEA  but there were still more than 350 cases and it remains a hotspot for the virus due to a continued high incidence per head of population.

The situation has changed marginally for the better also in the west and south of Laois - the Mountmellick to Borris-in-Ossory LEA.

Health Protection Surveillance Centre figures for Laois for in the two weeks to January 18 reveal 791 new cases which is higher than the 744 new cases in the 14 days up to January 11.

The Laois incidence was just 55.5 per 100 k on November 30 which was the last day of the October to November Level 5 restrictions. Just 45 new cases were reported in the two weeks to November 30.