BREAKING: Covid-19 surge slows in all Laois electoral areas but the spread is above average around two big towns

A lot done but more to do for Portlaoise, Portarlington Graiguecullen, Borris Mountmellick Local Areas 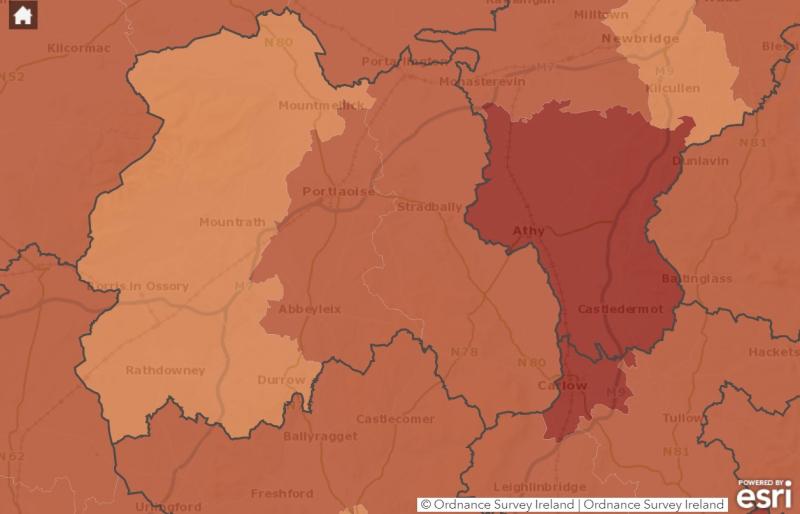 Covid-19 lockdown sacrifices being by Laois people in suppressing Covid-19 could finally be paying off but the most populated parts of the county continue to have stubbornly above-average incidences while the entire county has virus rate which is ten times the December 1 level, according to the up to date official figures.

The latest Local Electoral Area (LEA) breakdown published on January 28 on the Covid-19 Ireland data hub covers the number and incidence in the middle of January from the January 12-25.

The decline in new cases means the latest incidence remains high but has fallen substantially to 773.7 per 100k. However, this is above the national average incidence of 721.1 per 100,000 k.

The incidence and numbers have also reduced substantially in the Portarlington Graiguecullen LEA. There were 215 new cases in the 14 days to January 25 leading to an incidence of 765.2 per 100k population.

While the incidence in the area is above the national average, it is a big improvement on the earlier weeks in January. There were 357 in the two weeks to January 18 and 404 in the 14 days to January 11. The incidence per head of population is now half the January peak which was 1437.9 per 100 k.

There has also been an improvement in the west and south of Laois - the Mountmellick to Borris-in-Ossory LEA.

Health Protection Surveillance Centre figures for all of Laois from January 12 to 25 show that there were 501 new cases giving an incidence of 591.5 per 100k. Just one part of Laois, the Borris Mountmellick LEA, had an incidence lower than this. It contrasts to the incidence was 933.9 per 100 k in the 14 days to January 18.

While numbers of are falling a big decrease in cases will have to be achieved to get to a point that the county was at at the start of December 2020 when many businesses reopened after the October to December lockdown was lifted.

The Laois incidence now is nearly 10 times bigger than the 55.5 per 100 k on November 30 which was the last day of the  Level 5 restrictions. Just 45 new cases were reported in the two weeks to November 30.

Up to date figures published NPHET up to midnight, January 27 show that the Republic's overall incidence rate has fallen further to 621.9 per 100 k population due to 29,614 cases in 14 days. The daily number of new cases on January 27 was 1,466 which included just 15 new Laois cases. MORE DETAILS HERE.

Read also: A LONG WAY TO GO IN COVID BATTLE