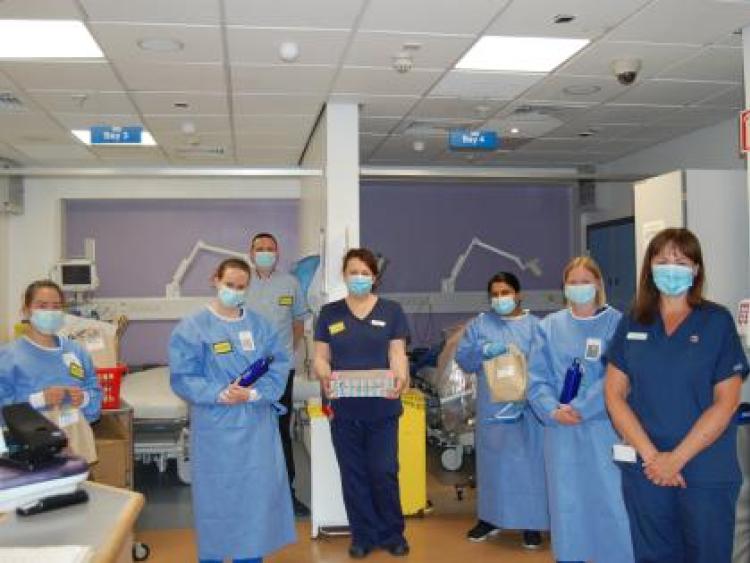 Nursing staff on the Covid-19 at Portlaoise hospital

Half of the patients with Covid-19 at Portlaoise hospital’s Frontline staff are critically ill but the number of admissions is holding steady, according to weekend figures from the HSE.

Staff at the Midland Regional Hospital Portlaoise were treating 12 patients who are critically ill on Saturday night.This is the highest number of people who have become very sick in the Laois hospital during the third wave.

The HSE’s COVID-19 Daily Operations Update for Saturday, January 30 shows that the 12 patients were receiving intensive care to fight the virus by 8 pm.

The number in ICU is a large multiple of what can usually be accommodated at the Portlaoise hospital critical'sccare facilities. Covid-19 positive patients are cared for in a designated general ward, ICU and HDU which were expanded to cope with the third wave surge.

The HSE report, which was published on Sunday, shows that there were a total of 24 people ill with the virus at the Laois hospital. There were no new Covid admissions on Saturday nor were there any suspect cases.

There were four general beds and no ICU bed at the hospital going into Sunday morning.

Staff at Portlaoise have already had to transfer out at least four critically ill Covid-19 patients during January.

Despite having far less resources, the Laois hospital ranked with the country’s biggest hospitals in terms of managing critically ill patients this weekend.

The pressure on the hospital has not eased significantly as January ends despite a fall in the number of new community acquired infections in Laois and other counties which are served by Portlaoise hospital.

The report shows that there were 54 confirmed cases at the Midland Regional Hospital Tullamore. The Offaly hospital had two suspect cases on Saturday. Staff were treating seven critically ill patients who had tested positive. There were no new admissions on Saturday.

The Offaly hospital had eight available general care beds but no ICU bed on Saturday evening.

Kildare’s hospital is getting busier with Covid. Naas General Hospital had 35 confirmed cases and five suspected cases on Saturday night. Six  people were admitted with the virus in the previous 24 hours - the second highest daily admission number in Ireland on Saturday.

There were 85 confirmed and five suspected cases at Tallaght on Saturday night.  The west Dublin hospital had 46 general beds and one ICU bed available. Ten Covid patients were critically ill in ICU - nine confirmed one suspected.

St James's had 85 confirmed and 40 suspected cases by 8 pm January 30. It had 63 general beds and ICU bed available going into Sunday. There were 18 confirmed and one suspected Covid patients in its ICU.

The ICU figures around the country have not changed significantly in a week. There were 218 critically ill people in hospitals on Saturday compared to  222 people in ICU departments over the previous weekend.

Of the 218 in ICU, six were suspected cases. Of the total 132 were ventilated (129 confirmed, 3 suspected). This is down slightly at the weekend. The report does not include other non-ICU Covid-19 patients who are quite ill on the wards.