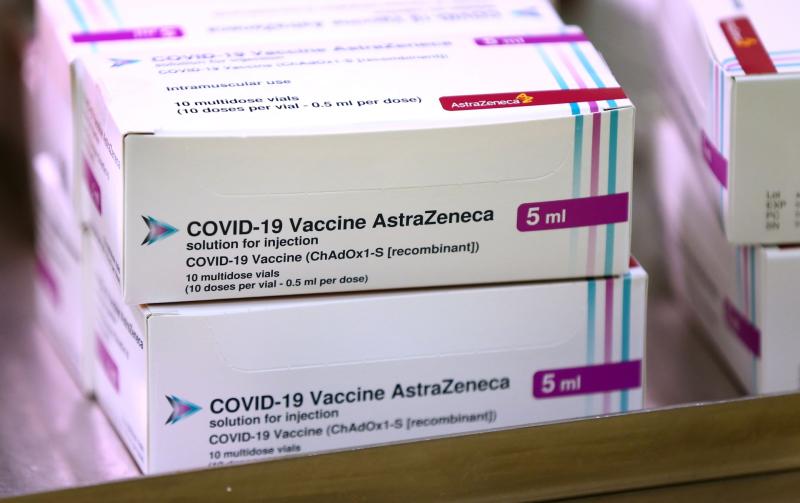 AstraZeneca vaccine will be used on adults aged 18 to 70 in Ireland.

The Covid-19 Oxford AstraZeneca vaccine will not be used to innoculate Irish people who are aged over 70 but it is approved for people of all ages in Ireland, according to a statement from the Department of Health.

The decision is out of line with other countries that have approved the vaccine for use in all age groups such as the UK and limited to those aged over 65 as has happened in some EU countries. It is not in line with safety assessment by EU regulators which say it is safe to use.

The move is likely to make the vaccination programme more complicated as the AstraZeneca vaccine presents fewer difficulties to administer than the Moderna and Pfizer vaccines which must be stored at extremely low temperatures and have a short shelf life once out of storage.

The Department has announced that Ireland's National Immunisation Advisory Committee (NIAC) has recommended that in line with the approvals granted by the European Medicines Agency (EMA), all currently authorised Covid-19 vaccines can be used in adults of all ages, including those aged 70 years and older.

However, in a statement issued by the Department of Health, NIAC said it has also recommended that mRNA vaccines (Pfizer BioNTech and Moderna approved in Ireland) should be used for the over 70’s where practicable and timely.

It said Dr Tony Holohan, the Chief Medical Officer, has reviewed the NIAC’s recommendations and has advised the Minister for Health Stephen Donnelly who has accepted the recommendations provided.

This means the AstraZeneca vaccine will be given to those under 70. It is being used in the UK on all ages and  Dr Holohan explained the reasoning.

“The main objective of the vaccination strategy is to prevent morbidity and mortality. International and national data indicate that those aged 70 years and older are at significantly higher risk of hospitalisation and mortality. Due to the demonstrated efficacy of mRNA vaccines in older persons and in recognition of their particular vulnerability in terms of their increased risk of death and serious disease if they contract COVID-19, it has been recommended that mRNA vaccines be administered to all those over 70 years in order to provide the highest level of protection available to this population.”

A statement added that the High-Level Taskforce on COVID-19 Vaccination and the HSE have been informed of the decisions and are working through the operational implications.

The Department of Health statement said that the Minister has asked the HSE and the Taskforce to advise him on the immediate implications for the vaccination programme.

It said a number of other EU countries have made similar decisions with regard to the provision of mRNA vaccines to older people.

Ireland cannot use the AstraZeneca vaccine without the European Medicines Agency's approval which has been granted. In doing so the EMA said the vaccine can be used for all adults over 18. The Department of Health issued statement said data is limited.

Despite this, the belief in Ireland is that evidence is limited.

"The expert advice to the Minister recognised that currently there is limited data on the AstraZeneca vaccine in relation to older age groups. Those aged over 70 are a key priority group for protection because of their greater risk of severe illness, hospitalisation and death from COVID-19," said the statment.

Supplies of AstraZeneca will begin arriving in Ireland from next week and deliveries of Pfizer and Moderna will continue as scheduled. The vaccine is easier to use because it can be stored in a regular fridge. However, Ireland is getting less of the British developed vaccine than expected because of supply problems.

Minister Stephen Donnelly said: “It has been a remarkable achievement by science to have developed, rigorously tested, gained regulatory approval and distributed three safe and effective vaccines in little over a year since SARS-COV-2 was first identified. The addition of a third COVID-19 vaccine from AstraZeneca will significantly enhance the implementation of our vaccination programme and, together with those from Pfizer and Moderna, will play a very important role in protecting our population from COVID-19 and helping us to overcome the challenges which we have faced over the last year. The roll-out of community vaccinations to our over 70s will begin as planned this month starting with those aged 85 and over.”

German and French authorities are only giving the vaccine to 18-64 year olds and say there there is not enough data on how well it protects the over-65s.

More info from the Department of Health in Ireland

On January 29th the European Commission granted conditional marketing authorisation for COVID-19 Vaccine AstraZeneca for use in people from 18 years of age, based on a recommendation from the European Medicines Agency (EMA).

The AstraZeneca vaccine is made up of another virus hat has been modified to contain the gene for making a protein from SARS-CoV-2COVID-19.  Vaccine AstraZeneca does not contain the virus itself and cannot cause COVID-19.

Combined results from 4 clinical trials in the United Kingdom, Brazil and South Africa showed that COVID-19 Vaccine AstraZeneca was safe and effective at preventing COVID-19 in people from 18 years of age.

These studies involved around 24,000 people altogether. Half received the vaccine and half were given a control injection, either a dummy injection or another non-COVID vaccine. People did not know if they had been given the test vaccine or the control injection.

Most of the participants in these studies were between 18 and 55 years old. There were not enough results in older participants (over 55 years old) to provide a figure for how well the vaccine will work in this group. However, protection is expected, given that an immune response is seen in this age group and based on experience with other vaccines; as there is reliable information on safety in this population, EMA’s scientific experts considered that the vaccine can be used in older adults. More information is expected from ongoing studies, which include a higher proportion of elderly participants.

Advice from the National Immunisation Advisory Committee (NIAC) recommends that in line with the conditional marketing authorisation granted by the EMA:

all currently authorised COVID- 19 vaccines can be used in adults of all ages, including those aged 70 years and older.
NIAC stated that given the high rates of community transmission, the best vaccine to administer to the older population is the one which can be soonest administered.
Where practicable and timely, those aged 70 years and older should be given mRNA vaccines, as these vaccines have a higher reported overall efficacy which makes them preferable for use in those at highest risk of adverse outcomes.

The main objective of the vaccination strategy is to prevent morbidity and mortality. International and national data indicate that those aged 70 and older are at significantly higher risk of hospitalisation and mortality.
Due to the superior efficacy demonstrated by mRNA vaccines, including in older persons (albeit the data is limited), and in recognition of their particular vulnerability in terms of their increased risk of death and serious disease if they contract SARS-CoV- 2, it is recommended that mRNA vaccines be administered to all those over 70 years in order to provide the highest level of protection available to this population.
The policy advice a in relation to vaccination of those older than 70 years with mRNA vaccines will be updated as required, based on any further NIAC advice.

What is an mRNA vaccine?

mRNA vaccines are a new type of vaccine to protect against infectious diseases. However, researchers have been studying and working with them for decades.

Once an mRNA vaccine is injected into muscle cells, it gives them instructions for how to make a harmless protein called a spike protein that is unique to the COVID virus.
Next, cells display the spike protein on its surface.
The body recognises that the spike protein should not be there and builds defensive white cells that will remember how to fight the virus if exposed to it in the future.
After the spike protein is made, cells breaks down the mRNA instructions so they do not stay in the body
There are currently  two mRNA vaccines licensed for use in Ireland -the Pfizer/BioNTech, and Moderna vaccines.