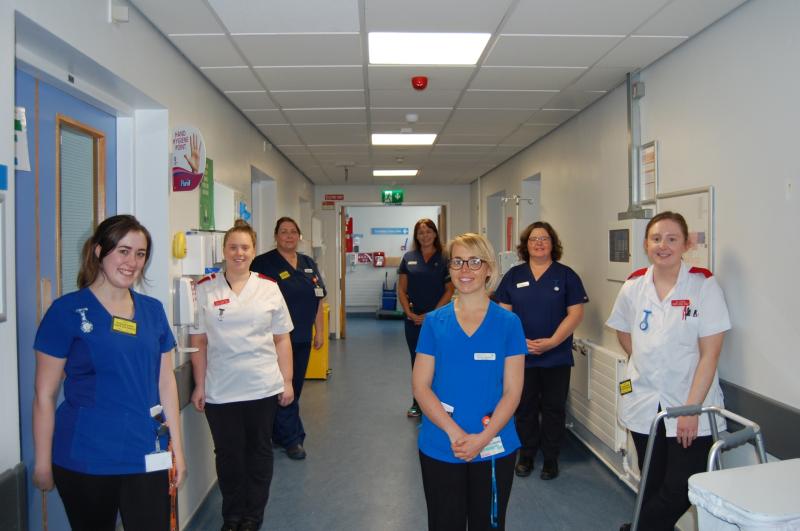 Nurses on duty in Portlaoise hospital during the summer of 2020

Frontline Covid-19 staff at Portlaoise hospital continue to see new cases of people who need to be treated in hospital for the disease but pressure has eased substantially on the Laois hospital's ICU.

Staff at the Midland Regional Hospital Portlaoise were treating four patients who are critically ill on Sunday, night February 7 according to the latest figures from the HSE. This is down from 12 patients who were very sick during the first weekend of February.

The HSE’s COVID-19 Daily Operations Update for shows that a total of 20 people were ill with the virus at the Laois hospital - which is down five on the previous week. However, there were three new Covid admissions over the weekend. There were no suspected cases.

There were nine general beds and one ICU bed at the hospital going into Monday morning. This represents an improvement in critical care capacity for the first time in weeks.

The report shows that there were 35 confirmed cases at the Midland Regional Hospital Tullamore. This is down from a third wave peak of 55 the previous weekend. The Offaly hospital had one suspect case but no new admissions on Sunday. However, its ICU remains busy. Staff were treating six critically ill Covid-19 patients on Sunday night which is down one from the previous Sunday.

The virus has also meant there was no general or ICU beds at the Offaly hospital by the end of the weekend.

The pressure is still on at Naas General Hospital where 32 people were sick with the virus. There two suspected cases on Sunday night and one patient was admitted with the virus in the previous 24 hours.

There were 61 confirmed and eleven suspected cases at Tallaght on Sunday night.  The Dublin hospital had 23 general beds and three ICU beds available. There were 10 critically ill Covid patients in ICU down one on the previous week.

St James's continues to be the busiest hospital. It had 98 confirmed and 103 suspected cases by 8 pm February 7. It had 59 general beds and one ICU beds available going into Monday. There were 19 confirmed and Covid patients in its ICU which is the same as recent days.

Nationally, there were 1,121 people in hospitals by 8 pm on Sunday night. There were 211 suspected in hospitals but 37 people were admitted with the virus in the previous 24 hours.

There were 183 critically ill people in hospitals on Mondy. Of these, six were suspected cases. Of the total,133 were ventilated (132 confirmed, 1 suspected).

Covid-19 was a factor in the lives of four people who died in ICU on Sunday.