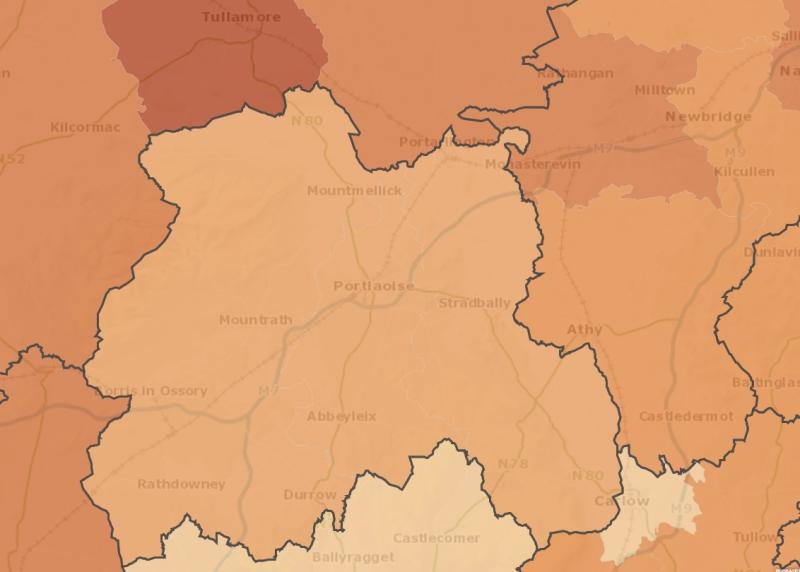 The incidence of Covid-19 has dropped significantly across Laois while the incidence of the disease is below the national average in all areas, according to the latest official figures.

The latest Local Electoral Area (LEA) breakdown published on March 18 on the Covid-19 Ireland data hub covers the 14 days from March 2 to March 15.

The Datahub figures show that there were 33 new cases in Portlaoise in the 14 days covered by the latest data down from 51 new cases in the two weeks to March 8.

The latest figures from the Mountmellick to Borris-in-Ossory LEA show a small decrease. There were 17 cases in the two weeks to March 15 compared to 18 new cases in the 14 days to March 8. The latest incidence has fallen to 68.5 per 100 k down slightly from 72.6 per 100k on the previous two weeks.

Health Protection Surveillance Centre figures for all of Laois in the 14 days to March 15 show that a total of 73 new cases were confirmed giving an incidence of 86.2 per 100,000. The five-day daily average for new cases was just three a day across the county.

Up to date figures published by NPHET up to midnight, March 17 shows an incidence of 76.7 per 100 k due to 65 new cases in the previous two weeks. The five-day moving average was four a day.

Laois is nearing the level reported at the end of the second wave restrictions on November 30 last year when the incidence was 55. per 100k of the population over a two week period.

While Laois is making significant progress neighbouring counties of Kildare, Offaly, Carlow Tipperary have higher incidences of the virus. Only Kilkenny has a lower incidence.