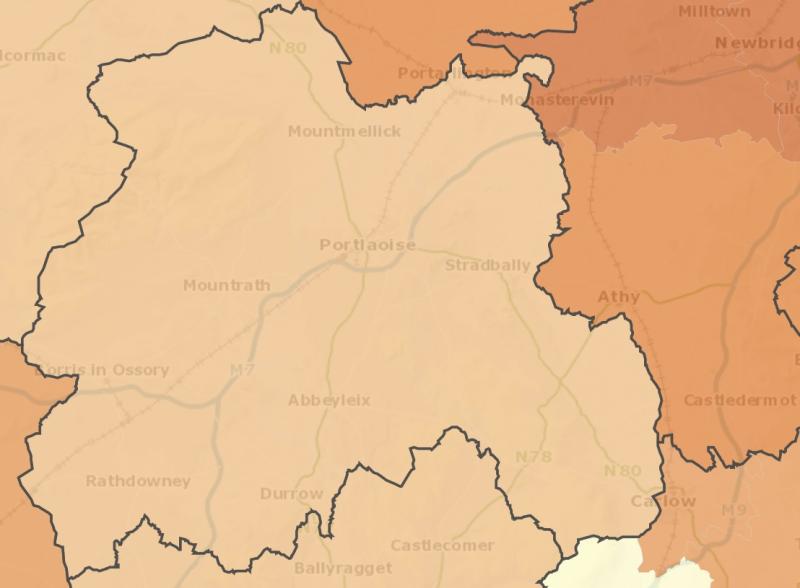 Covid-19 march in the south and west of Laois halved in the past two weeks and also improved on the opposite side of the county but the progress has slowed around Portlaoise.

The latest Local Electoral Area (LEA) breakdown published on May 13 on the Covid-19 Ireland data hub covers the 14 days from April 27 to May 10.

The Portlaoise incidence remains well below the national 14-day incidence level recorded to May 10 of 128.1 per 100k. The national rate decreased in the most recent analysis.

The latest figures from the Portarlington Graiguecullen show further improvement despite the fact that it has a big border with Kildare which has the worst incidence in Ireland.

The latest figures from the Mountmellick to Borris-in-Ossory LEA also show the most improvement. A total of nine tested in the past two weeks positive down from 17 up to May 3. The latest incidence has fallen to 36.3 per 100 k from 68.5 per 100 k.

The district is less populated than the others. With 24,807 people it includes Rathdowney, Mountrath, Durrow, Castletown, Camross, Errill, Clonaslee and Rosenallis. It borders Tipperary, Offaly and Kilkenny.

Health Protection Surveillance Centre figures for all of Laois in the 14 days to May 10 show that there were 36 new Laois cases - down ten on the previous two weeks. The countywide incidence is 42.5 per 100 k down from 54.3. The daily average remains two new cases a day.

The latest published figures for Laois were published by NPHET up to midnight May 12 show little change. The incidence has fallen to 41.3 per 100 k due to 35 new cases in the previous two weeks. The five-day moving average is two new detections a day.