NEARLY 100 NEW CASES IN ONE AREA 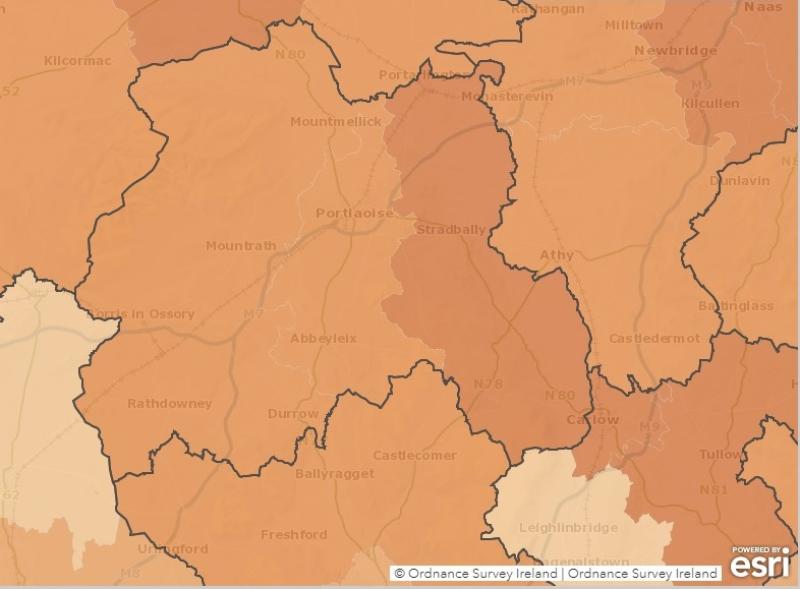 Laois now has one of the worst incidences of Covid-19 in Ireland as the Delta variant pushed the infection and incident rate up sharply with the Portlarlington to Graiguecullen area showing the highest hike in cases.

The latest Local Electoral Area (LEA) figures as published on July 22 on the Covid-19 Ireland data hub breakdown covers the period from July 6 to July 19.

Portlaoise was the first area of Laois hit by the Delta wave. Both of the other two analysed parts of the county have caught up and passed the town and its surrounds. They are now showing sharp rates of increase in incidence and infections.

The latest figures from the Portarlington Graiguecullen LEA show that the number of cases almost quadrupled.

Part of Portarlington is in Offaly which means the town could have a higher rate. The same can be said of Graiguecullen which borders Carlow town.

The situation has worsened also in the Mountmellick to Borris-in-Ossory LEA where the population is more spread out than the other two elector areas of Laois.

The district is less populated than the others. With 24,807 people it includes Rathdowney, Mountrath, Durrow, Castletown, Camross, Errill, Clonaslee and Rosenallis. It borders Tipperary, Offaly and Kilkenny.

Health Protection Surveillance Centre figures for all of Laois show the number of new cases in Laois doubled in the two weeks measured with most of the new cases emerging in just one week.

It all means that Laois has the sixth worst incidence of the virus in the county just behind Offaly. Donegal has the highest levels of the disease.

Of the 11,707 new infections identified nationally in the two weeks measured, a total of 7,686 infections were detected around Ireland in the seven days to July 19.

Half of all infections are caused by close contacts.

Dr. Ronan Glynn, Deputy Chief Medical Officer, Department of Health, said: “The Delta variant is now dominant across the EU and, in recent weeks, we have noticed a sharp increase in the level of travel-related cases of COVID-19.

"As disease incidence increases both here in Ireland, and across Europe, it is important that, if you intend on travelling, you are aware of the disease profile in the area you are visiting, as well as the public health measures in place locally.

“Only those who are fully vaccinated or who have recovered from COVID-19 in the last 180 days should be considering international travel at this time.

“If you have recently returned to Ireland and have any symptoms of #COVID19 including fever, cough, headache, sore throat or a blocked or runny nose then please self-isolate and get tested without delay,” he said.

The HSPC advises that the cyber attack is still having an impact on data. It says the May 14 incident has prevented the routine notification of cases, associated deaths and outbreaks of COVID-19 to Computerised Infectious Disease Reporting (CIDR) system.

As an interim measure, provisional epidemiological reports will be prepared based on the information captured by the HSE COVID Care Tracker.

The HSPC says that as soon as all COVID-19 surveillance systems are restored, surveillance staff in laboratories, the Departments of Public Health and HPSC will work together to retrospectively collate and validate COVID-19 cases, outbreaks and deaths diagnosed and/or notified during this period.