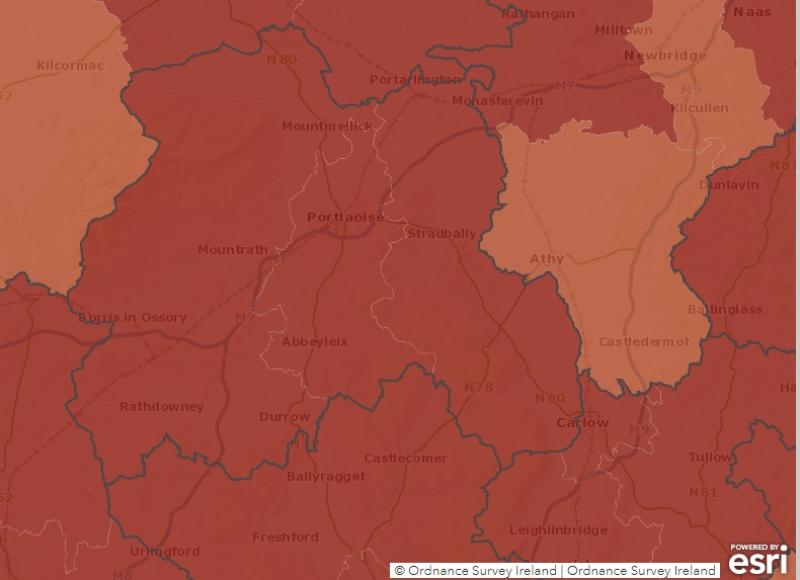 Every part of Laois has a higher than average rate of Covid-19 but there is a small chink of light in one electoral area where the incidence fell on the back of smaller number of new case.

Unfortunately, the county is no longer an isolated hotspot for the virus which is rampant around Ireland, latest local figures show.

The Covid-19 Ireland data hub. figures, which are based on health service confirmed positive tests, show that the levels of infection in all three Laois municipal districts are higher than the national average.

The Portarlington Graiguecullen Municipal District continues to have highest incidence followed closely by the Portlaoise Municipal District with the less populated Borris-in-Ossory Mountmellick in third but also above the national average.

The latest figures from the Portarlington Graiguecullen LEA reveal case numbers and incidence fell . There 390 new cases in the two weeks to November 15 giving an incidence of 1388.1 per 100 k.

The incidence has risen again in the Mountmellick / Borris-in-Ossory LEA after showing signs of slowing in early November.

The situation is still better than two weeks to October 24 when 303 new cases led to an incidence of 1221.4 per 100k of the population - double the national average at the time.

With 24,807 people it includes Rathdowney, Mountrath, Durrow, Castletown, Camross, Errill, Clonaslee and Rosenallis. It borders Tipperary, Offaly and Kilkenny. MORE ON SIGNS OF IMPROVEMENT IN LAOIS BELOW LINK.

The HPSC report also shows that Laois has the eleventh worst record of Covid-19 containment in the 26 counties. That's improvement on the fourth worst at one stage during the virus.

National figures published by NPHET on November 18 reveal 4,650 new cases of of the virus. This compares with 3,680 confirmed a week earlier on November 11.

Dr Tony Holohan, Chief Medical Officer, Department of Health said: “Approximately 1 in 6 people in Ireland experienced COVID-like symptoms such as cough, sore throat, high temperature or other flu like symptoms in the past week.

“The single most important action you can take if you experience any symptoms of COVID-19 is to self-isolate and arrange a PCR test – not an antigen test. If you want to avoid passing COVID-19 or other respiratory illnesses on to your friends, family or work colleagues, rapidly self-isolating as soon as your symptoms begin is the most important thing you can do.”