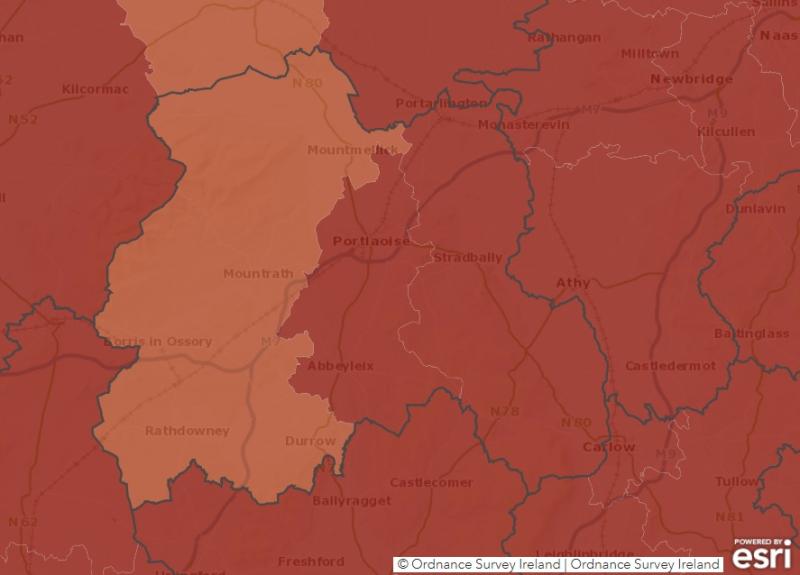 Covid-19 is on the march again in Laois according to the latest figures which show the county spread rising with the local area rates highest around Portlaoise, Portarlington and Graiguecullen.

Up to date data shows that Laois has the ninth highest incidence of Covid-19 in Ireland which is better than a peak of fourth highest but a lot worse the the second lowest. Ominously, the virus incidence has gone back above average in Laois in the past week due to surge in new cases over seven days.

The county is also back above over 1,000 new cases over two weeks with the Portlaoise area the worst hit while the situation is worsening again in the area that includes Portarlington and Graiguecullen.

The latest Local Electoral Area (LEA) figures published on December 2 show the virus incidence and case number between November 16 and 29.

The Covid-19 Ireland data hub figures, which are based on health service confirmed positive tests, show that there were 466 new cases in Portlaoise up to November 29. This compares with 457 cases between November 9 and November 22.

The latest figures from the Portarlington Graiguecullen LEA reveal case numbers and incidence is rising again. There were 375 new cases in the second half of November giving an incidence of  1334.7 per 100 k.

There were 330 new cases in the electoral area  an incidence of rate of 1174.5 per 100k population in the two weeks to November 22 a decrease on previous weeks.

The Health Protection Surveillance Centre (HPSC) tracks the spread of the disease on a daily basis for NPHET. It's figures show that the Laois county situation as worsened significantly in the space of a week.

HPSC figures showe that Laois now has the second lowest incidence of any county in Ireland in the two weeks to November 23.

Figures published on December 2 cover the two weeks to November 30. The reveal a jump in figures in the past seven days.

Nearly 60% of all new cases in the period analysed emerged in the seven days to November 30. A total of 595 cases were confirmed giving a seven day incidence of 702.5 per 100 k.

The two week figures remain the acid test about the spread of the virus. There were 1007 new cases in Laois from November 17 to 30. This has driven the incidence 1188.9 per 100k.

Nearly 80 people a day are testing positive in Laois.

Both the Laois seven day and 14 day incidences had fallen below the the national averages a week ago now they are back above average.

The National Public Health Emergency Team reported on Thursday, December 2 that the Health Protection Surveillance Centre has today been notified of  4,163 confirmed cases of COVID-19.

Dr Tony Holohan, Chief Medical Officer, Department of Health said: "Stabilisation is happening at too high a level. The current high incidence is driven by the Delta variant, which, coupled with the presence of the Omicron variant, means that the trajectory of the disease remains uncertain. In the last seven days 478 people with COVID-19 were admitted to hospital with 46 people admitted to ICU."