More than 1,000 cases in the town in four weeks 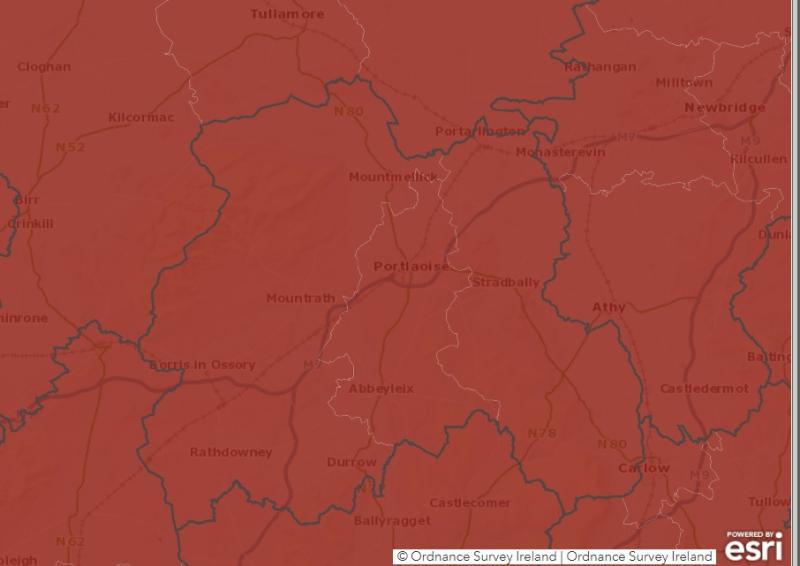 Portlaoise now has the second highest incidence of Covid-19 in Ireland according to the weekly pandemic breakdown of the disease incidence in local areas around the country.

The latest Local Electoral Area (LEA) figures published on December 16 show the virus incidence and case number for the first half of the December from November 30 to December 13.

The Postlaoise area incidence has risen sharply for yet another week. It is now way above the national average far ahead of the already high levels in the other Laois areas of Graiguecullen / Portarlington Municipal District and the Borris-in-Ossory / Mountmellick area.

The Covid-19 Ireland data hub figures, which are based on health service confirmed positive tests, show that there were 665 new cases in the Portlaoise LEA in the 14 days examined.

A number of districts had incidences above the 2,000 per 100 k mark in the two weeks to December 6 but the rate of infection has slowed in these while Portlaoise has gone in the wrong direction.

A measure of how bad things have got in Portlaoise can be found in the average incidence of all LEAs in Ireland. It is 1,305.1 per 100 k a slight decrease on the two weeks to December 6.

The latest figures from the Portarlington Graiguecullen LEA reveal case numbers and incidence a decrease in the incidence. There were 417 in the two weeks to December 13. The incidence remains high at 1484.2 per 100 k - above the national average.

The incidence has gone up again, but slightly, in the Mountmellick / Borris-in-Ossory LEA.

The Health Protection Surveillance Centre (HPSC) tracks the spread of the disease on a daily basis for NPHET. Latest figures show that Laois has the third highest incidence of the disease in Ireland.

There were 558 positive test results in the last seven days given a incidence of 658.8 per 100 k. Just over 45% of those who contracted the disease since the end of November did so in the second week of December.

On average, 76 people a day are catching the virus in Laois.

The county situation has improved from December 7 when 1,310 people tested positive for Covid-19 in the previous two weeks analysed giving an incidence rate of 1546.7 per 100k.

A total of 727 positive results were returned in the week to December 7 giving a rate of 858.4 per 100k. That was just over 55%, of cases detected over 14 days. On average, nearly 100 people a day tested positive in Laois between December 3 and 7.

While there has been a slowdown in infections, both the Laois seven day and 14 day incidences are above national averages.

Booster appointments available to over 40s from next week