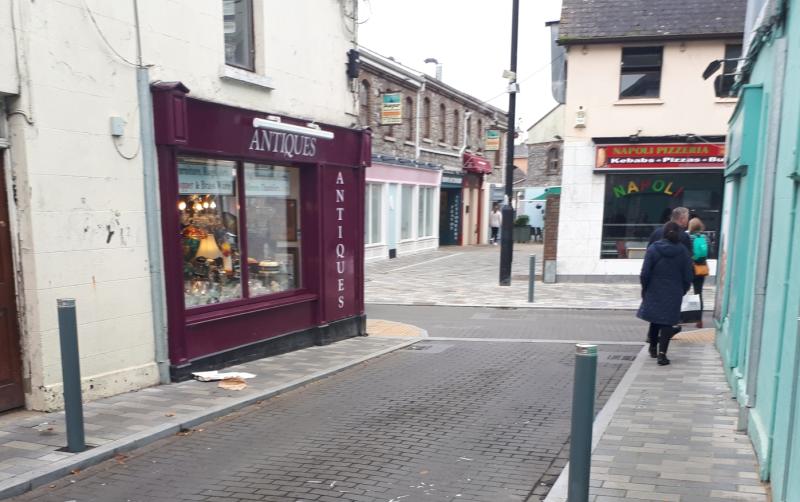 Injured man is understood to have been found on Bull Lane Portlaoise not far from the suspected attack on Main Street.

Laois Gardaí are reviewing CCTV footage from Portlaoise town centre as part of their investigation into what has been a narrow escape for a local man who suffered a severe stab wound in the town this weekend.

The Garda have also made a public appeal for help as they focus on an area between Market Square and the intersection of Main Street with Hynds Square and Bull Lane.

The Leinster Express understands that when Gardaí arrived on the scene between 3am and 3.30 am on Saturday, November 13 the injured man had made his way onto Bull Lane after being stabbed in the face.

They found that the man had suffered a severe facial cut which is suspected of being inflicted with some form of knife.

Gardaí are working on the basis that Portlaoise man, who was aged in his late 40s, was a innocent party in the incident which may have resulted from a conflict between others.

It is understood that the significant blood loss caused by the wound inflicted gave rise to gardaí seeking urgent medical assistance.

An ambulance was called and was dispatched from Tullamore. While Gardaí were waiting another ambulance stopped by coincidence at the scene on its way to Portlaoise hospital with another patient.

Emergency care was provided immediately by a paramedic and Gardaí worked with the ambulance service to transfer the man to Portlaoise hospital as soon as possible.

The victim received vital emergency treatment at the Midland Regional Hospital Portlaoise bringing him to a stable condition.

However, because of the extent of the injury, the man had to be transferred to St James’s Hospital in Dublin where specialist care was given.

It is understood that the streets of the town were relatively quiet at the time which is why Laois gardaí are focusing on CCTV footage to identify those who may have been responsible.

However, they are also appealing for anybody with information or who may have scene something that may help them with their enquiries to contact them at Portlaoise Garda Station on 57 8674100.