Man with schizophrenia not guilty of killing by reason of insanity 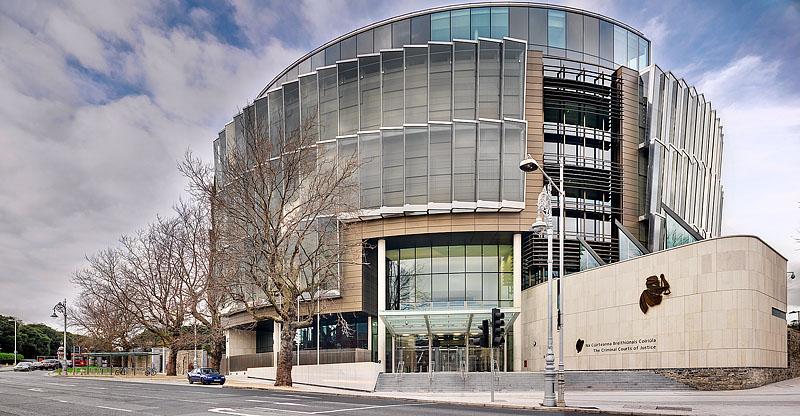 The Criminal Courts of Justice.

A jury has returned a verdict of not guilty by reason of insanity in the trial of a man with paranoid schizophrenia who stabbed a stranger in the head in a shopping centre on a busy afternoon.

Gerard Dowling (40) of The Sycamores, Freshford Road, Kilkenny was charged with the attempted murder of 60-year-old Simon Bourke at Market Cross Shopping Centre in Kilkenny City on July 13, 2016. He was also charged with assaulting Mr Bourke causing him harm and to producing a knife during the same incident.

Both the prosecution and defence agreed that Mr Dowling was insane at the time of the assault and under the Criminal Law Insanity Act qualified for the "special verdict" of not guilty by reason of insanity. After 40 minutes of deliberations following a four-day trial the jury of six men and six women returned the special verdict and Justice Paul McDermott directed that Mr

Dowling be admitted to the Central Mental Hospital (CMH).

Mr Dowling will return to court on November 7 when a doctor from the CMH will present a report to the court and recommend appropriate ongoing treatment.

Justice Paul McDermott thanked the jurors and exempted them from further jury service for ten years.

The trial heard that Mr Bourke and his partner went to Kilkenny City to walk their dog along the canal before having lunch at the Yard Cafe on Kieran's Street. Soon after leaving the cafe they noticed Mr Dowling, whom they did not know, following them. They became more concerned when they stopped at a shoe shop and Mr Dowling stopped also and stared at Mr Bourke. They walked on to Market Cross Shopping Centre and as they entered Mr Dowling got very close, prompting Mr Bourke to say: "Excuse me friend, can I help you?"

Describing what followed Mr Bourke said: "He took the knife straight out and launched straight into it. He lashed a blow in to my shoulder and thereafter he rained down blows on my head." He said he was struck with "great force" and it felt like a hammer or a rock was hitting him.

He fell to the ground while his partner fought off the attacker with her bag, knocking the knife from his hand. Following the attack doctors were unable to remove parts of the knife from Mr Bourke's head. They remain there as doctors feared that removing the metal would be more dangerous than leaving it where it is. He also suffered a broken finger.

Dr Brenda Wright for the defence and Dr Sally Linehan for the prosecution agreed that Mr Dowling had been diagnosed with paranoid schizophrenia many years earlier and was suffering from delusions at the time of the attack. Throughout his illness he had difficulty complying with his medical prescriptions and at the time of the assault had not taken medicMication for several months.

The doctors said he heard voices in his head and believed that Mr Bourke was a character named Tiny Harrington, who was responsible for the voices. He believed that by stabbing Mr Bourke he would get respite from the voices.
Dr Wright also confirmed that Mr Dowling was charged with harassment for sending threatening messages to his ex-partner. Earlier this year he was found not guilty of that charge by reason of insanity at Kilkenny Circuit Court.

Both doctors agreed that his condition qualified as a mental illness under the Criminal Law Insanity Act and that although he knew his actions were legally wrong, he did not know they were morally wrong. They also said that he was unable to refrain from acting as he did, due to his mental illness.

Counsel for the defence Colman Cody told the jury that based on the evidence given by both doctors they should bring a verdict of not guilty by reason of insanity. Denis Vaughan Buckley for the prosecution asked the jury to make their decision based only on the evidence they had heard and to use their common sense. Mr Justice Paul McDermott told the jury that there were three possible verdicts open to them: guilty, not guilty, or not guilty by reason of insanity.

He explained that for the special verdict to be brought the defence must prove beyond the balance of probability that Mr Dowling was insane at the time of the assault and therefore did not know that his actions were morally wrong, or could not refrain from acting as he did.