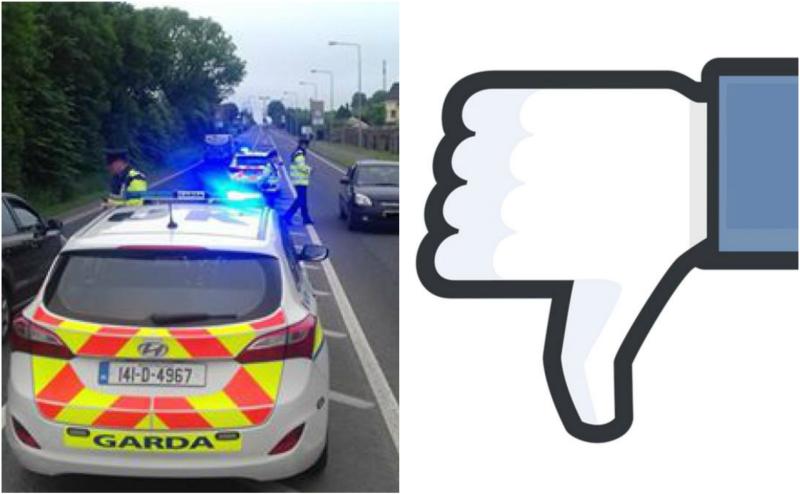 Over the last few weeks, the ugly face of criminality has revealed itself in in the midlands.

From Richie McKelvey being attacked in Brosna, to a string of burglaries at homes, farms and businesses across the county.

Last week, we ran a story in which the Laois-Offaly Crime Prevention Officer called for people to stop posting Garda checkpoint locations on social media. It caused a furious debate and in a poll asking whether or not people who post such information should be punished, more than 80% of you said no.

Therefore, eight out of every ten people in the county believe that posting checkpoint locations is fair game. The reality of 21st century policing says otherwise, a world in which criminals are one step ahead of gardaí, aided in no small part by social media.

For quite a number of years gardaí have warned people about posting information about their lives on social media; when they're away on holidays, out for dinner, and so on. Why? Because criminals are watching, and are known to use such posts to their advantage. When you're sunning yourself for all to see on a string of Facebook posts, the local petty criminals are fleecing your house. It's happened over and over again.

So why then would people think posting checkpoint locations on social media is acceptable? Many of the pages posting such information are public, free for anyone to view, including gangs like the one who stormed Richie McKelvey's home in early November.

If you think such individuals are not using social media in this way to scout out garda checkpoints, you're naive. If you think your post to warn friends about the garda checkpoint at the local crossroads doesn't make a difference, you're in denial. By posting locations, you are enabling criminals to navigate their way through the countryside and into the homes of helpless victims - that's a fact.

It emerged last weekend that there had been a garda checkpoint set up near the home of Richie McKelvey before it was targeted by thieves. His sister revealed on RTE Radio that details of that checkpoint being lifted were posted on Facebook. What that says to criminals is that that area is now free - what are the chances of two checkpoints on the same lonely road in one night?

What's baffling about the reaction to this issue on our social media channels is the people who say that gardaí should be targeting real criminals, and to quote one commentator, 'not targeting honest people paying their wages.' As another put it, 'all they're doing at checkpoints is hitting the fella who couldn't afford his tax this month.'

Firstly, people driving without the likes of tax and insurance are breaking the law and should be punished in accordance with the Road Traffic Act. So is that the crux of it? People warn each other about checkpoints so they can get away with breaking perceived minor laws.

There isn't another obvious justification for warning people about Garda checkpoint locations. Equally, if you're law abiding, why do you need to know where and when there's a checkpoint? What have you got to hide? If you are 'above board' as they say, you'll have no problem going through a checkpoint.

So, we've established that those who warn others of checkpoints or need to know about checkpoints are trying to get away with something, even though they don't count it as 'real crime.' They are trying to do their pals a favour and that's an understandable human response.

It's also clear that these people ignore the fact that others can see the posts - namely those 'real criminals' who are using the information to roam the countryside getting away with murder. Therefore, posting checkpoint locations is reckless and helps criminals evade gardaí, whether that is the intent behind it or not.

Social media is posing many issues for gardaí, but this is perhaps the most serious. Should there be punishment? Social media accounts are easily traced and perhaps those helping criminals in this way deserve to be fined. The law is slow to react and there are no such punishments available for authorities, so instead they must depend on requests like that issued last week for people to stop.

With more than 80% of our readers thinking it's fine to post such details online, it appears those requests will be scorned and people will continue to give the criminals of Ireland a leg up as they terrorise our county.