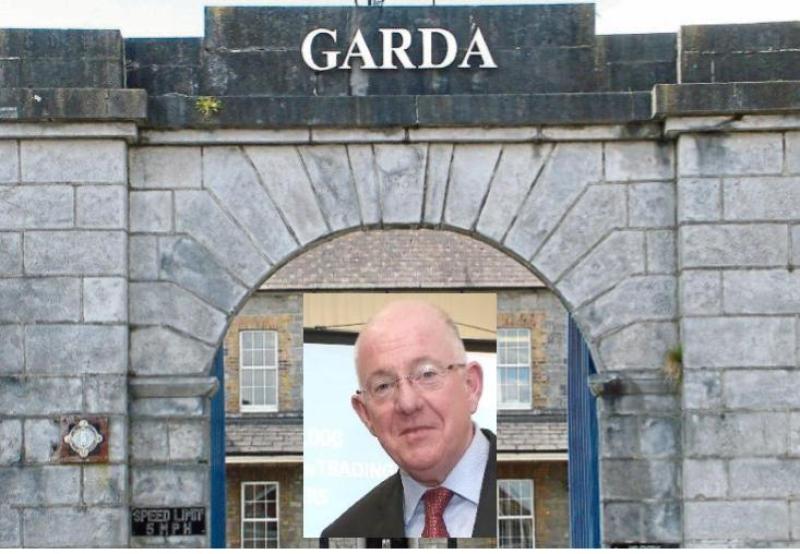 Warnings about Christmas drink driving and festive thieves were issued by Laois TD and Minister for Justice and Equality, Charlie Flanagan during a Christmas Eve visit to Portlaoise Garda station .

The Portlaoise-based TD met Gardaí and civilian staff on duty over the festivities. He thanked them for their service and acknowledged the work done by all personnel throughout the year and, in particular, over the holiday period

“Portlaoise Garda Station is a busy place in a town with two prisons, one of which is a high-security prison.  Proximity to a busy motorway network and the fact that this station is the divisional headquarters for a diverse area taking in towns, villages and very rural areas means this station is a microcosm of some of the important work undertaken by Gardaí around Ireland," he said.

The Minister took the opportunity to emphasise to the public the importance of heeding the simple message don’t drink and drive.

“ Síochána will be out in force conducting its Christmas and New Year road safety campaign and I would like to take this opportunity ask every road user, be it, driver, passenger, motorcyclist, cyclist or pedestrian to be conscious of the choices they make over the Christmas period.  Never, ever drink and drive, reduce your speed and be of road conditions especially when travelling on unfamiliar roads.

“I am deeply conscious of the serious issue of road safety and of the traumatic impact of road traffic collisions on those directly affected and their families, especially over the Christmas period.  I am also mindful of the impact of dangerous driving, including anti-social driving, more generally on the quality of life of residents in local communities across the country. Road Safety is a shared responsibility, one the Government and An Garda Síochána take very seriously,” he said.

Minister Flanagan highlighted the importance of security measures, reinforcing the advice from An Garda Síochána.

“I would like to join An Garda Síochána in reminding people to “Lock Up and Light Up”. Householders need to remain vigilant as, traditionally, the number of burglaries rise in the winter time. I advise everyone to remember to turn on some lights, use timer switches and lock all doors and windows. If you are leaving the house over the festive period, to visit family or take a holiday, please remember to use an alarm, store extra keys away from windows and letterboxes and don’t store large amounts of cash or jewellery in your home.

“ Síochána will be working around the clock, as they do all year, to tackle the scourge of burglary gangs operating throughout the country.  We have robust legislation in place but I want to encourage everyone to make an effort to ensure that their homes are safely secured over the Christmas period, and for the remainder of the winter months.”

In relation to support for local communities to tackle crime, the Minister highlighted the value of the Text Alert Scheme and the CCTV Scheme in place.

The Minister reminded communities that funding is available for the Text Alert Rebate Scheme in 2017. The rebate is available to almost 1,000 local groups registered under the Garda Text Alert Scheme. At the Ploughing Championships in September, the Minister announced that his Department would provide €100,000 for the rebate scheme this year, and encouraged all
groups to apply directly and without delay to Muintir Tire to avail of the rebate.

“Community Alert and Text Alert  particular, are a perfect example of citizens working in tandem with their local Gardaí to provide a safer community for all those who live there. Text Alert Groups are a vital link between the public and An Garda Síochána, and let no one have any doubt about the commitment of An Garda Síochána and this Government to ensure that we tackle crime in this country.  Further information on these schemes is available on my Department’s website.”

He said €1 million was secured in Budget 2017 to launch a new round of community CCTV schemes in line with the Programme for Government commitment to providing investment in CCTV systems. The scheme was launched on 13 April 2017 and is intended to run for 3 years.  Any communities who wish to avail of the scheme are urged to contact the Department of Justice and Equality.

The Minister said An Garda Síochána would get the Government’s continued support for the invaluable service they provide 24/7, 365 days a year. He pointed to the progress on the road to an overall Garda workforce of 21,000 by 2021, comprising 15,000 Garda members, 2,000 Reserve members and 4,000 civilians.

Emphasising the importance of Reserves and Civilian staff, the Minister said the first batch of new Garda Reserves would start training in the new year. He said a further 500 civilians would also be recruited next year.

"Some €330 million, including €205 million under the Capital Plan 2016 to 2021, is being invested in Garda ICT infrastructure over the period 2016 to 2021.  The Capital Plan also provides for an investment of €46 million in the Garda fleet to ensure that An Garda Síochána has a modern, effective and fit for purpose fleet.