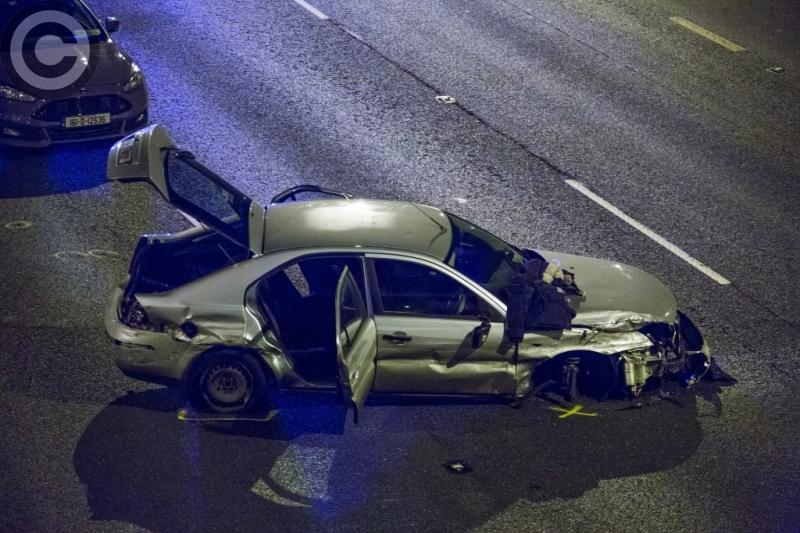 One of the vehicles involved in Thursday afternoon's crash on the N7 at Johnstown. Picture: Tony Keane/Leinster Leader

A 16 year old male is scheduled to appear before a Special Sitting of Naas District Court this morning at 10.30am charged in connection with the arrests on the Naas Road on Thursday evening.

One youth was released without charge last night, another remains in Garda custody and one remains in Tallaght Hospital.

The three teenage males were arrested by Gardai following Thursday afternoon's crash on the N7 northbound at Johnstown. Their car had been stopped as part of an inquiry into a burglary in Athy.

According to a garda statement, at approximately 3pm on Thursday, December 28, gardai received a report of a burglary at a house in Athy. The intruders were disturbed and fled from the scene in a waiting car when the occupants of the house returned home.

During a follow up operation members of a Garda anti-burglary unit intercepted a car on the N7 Naas Road at approximately 3.45pm. The car initially stopped for Gardaí but when approached took off a speed in the direction of Dublin.

According to gardai, moments later this car was involved in a collision with a second car at on the N7 at junction 8, Johnstown. A young man in his teens, who was one of the occupants of the car, was injured in the collision and was taken by ambulance to Tallaght Hospital, where his condition is described as serious. Three other youths, all male and understood to be in their teens, were arrested during follow up searches near the crash site a short time later.

All three are currently detained for questioning under section 4 of the Criminal Justice Act, 1984 at Naas Garda Station.

The driver and sole occupant of the second car was taken to Naas Hospital with minor injuries.

The scene of the collision is currently being examined. The collision has been referred to GSOC (Garda Síochana Ombudsman Commission) for investigation.

The incident caused traffic chaos in the area all evening. Traffic had been diverted via the Johnstown slip road, but the N7 has fully reopened northbound.