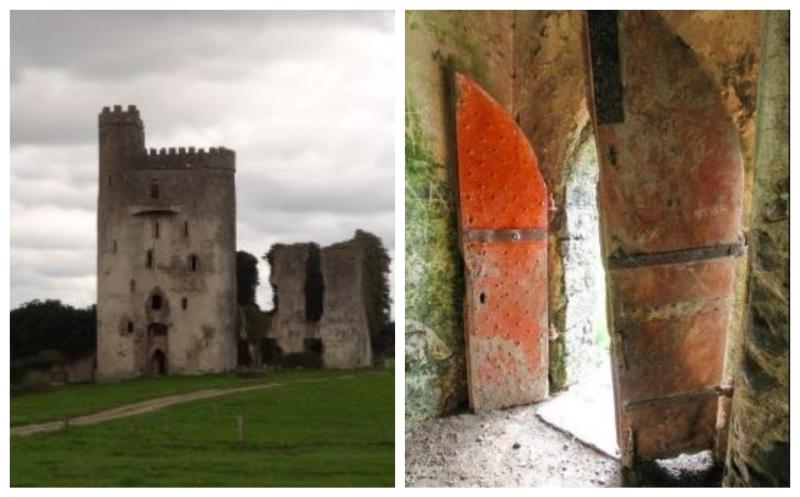 A bizarre burglary took place at a historic Laois castle at the weekend when two large distinctive doors were stolen from Ballyadams Castle in Laois.

The doors are painted red and are 8cm thick wooden doors with studded nails and they are an important and valuable part of the castle.

The incident took place on Saturday, May 26 and a large vehicle would have been needed to carry the doors away.

Owner of Ballyadams Castle, David Butler, believes the stolen doors are "in the back of a van on their way to the continent".

He spoke on Midlands 103 this morning about the theft of the 300 year old doors from the castle, which occurred last Friday night May 25.

The tall heavy wooden gates are each 3 feet wide, studded with iron nails and rivets.

The castle is located about six miles from Electric Picnic, between Stradbally, Athy and Ballylinan. It is visited by tourists at least once a fortnight, Mr Butler said.

He fears they were stolen to order by someone from Europe.

"I suspect they were seen either on an internet blog, or somebody visited and saw them, and put out the word that they would like them, and there are plenty of people who would do that sort of job to order. I can only think of someone doing up a castle in France, Spain or Italy," he said.

There are no leads on the Garda investigation Mr Butler said, but he is hoping CCTV in the nearby towns might pick up a vehicle, travelling between 12.30 am and dawn last Saturday May 26.

He is waiting on advice from Laois Heritage Society on how to replace the doors on the castle, because it is a protected structure.

"We need to block the door to allow humans in but stop cattle," he said.

The ruins of Ballyadams castle lie near the village of Ballylinan in Co Laois.

This is the remains of the 15th century abode of the O'Moore family. The castle remains are very striking and it lies on private property.

Gardai are yet to confirm the incident. Anyone with information can contact Abbeyleix Garda Station.

Neil Jackman is an archaeologist from Clonmel. He has shared the incident on Twitter.

****THEFT FROM BALLYADAMS CASTLE #LAOIS****
The large wooden doors of Ballyadams Castle were stolen on May 26th. If anyone is visiting architectural salvage stores please be on the lookout. If you have any info please contact Abbeyleix Gardaí (pic of doors © IrishStones) pic.twitter.com/ClInJJYvuV

Laois Heritage Forum has shared the information of the burglary on Facebook calling it  'shocking news'.