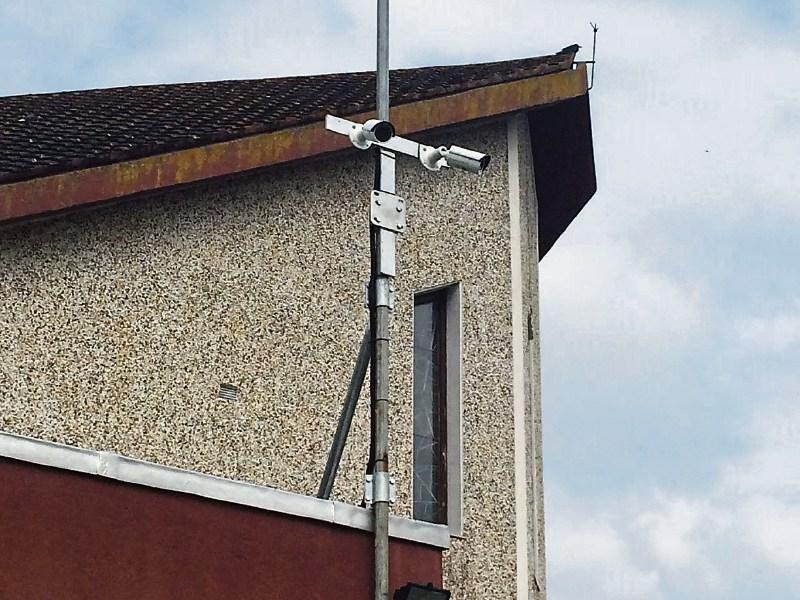 CCTV installed at the Parish Church in Borris-in-Ossory.

I understand how keen some communities are to have CCTV in their areas.

I know some groups feel that a local scheme would make their area safer, more secure, and less vulnerable.

And I know that some people think the Department of Justice and Equality is the block to this happening.

But that is not the case.  As Minister, I want to clear up some of the confusion which seems to have taken hold about the issue, and appeal to those who are entitled to get community CCTV schemes up and running to take on that responsibility and to avail of the assistance and funding available to do so.

- be approved by the local Joint Policing Committee,

- have the authorisation of the Garda Commissioner; and

- have the prior support of the relevant local authority, which must also act as data controller.

This has been the law since 2006 and it remains the law today.   And what that law means, is that whether a community CCTV scheme is privately funded, part Pobal funded (as many have been over the last decade) or seeking funding from my Department, the same rules apply – the Joint Policing Committee must approve the proposed scheme, the Garda Commissioner must authorise it and the local authority must both give support and also agree to act as data controller.

The data controller is the person who is responsible for the safekeeping and appropriate use of personal information, including the footage from any CCTV scheme.  They must make the necessary arrangements to ensure e.g. that any such footage is secure; that it is either viewed only by cleared and authorised people; or indeed held securely to be made available to the authorities when necessary and in accordance with law.

Can I say here and now that that is not true.  The truth is that the vast majority of local authorities are already doing so.  Indeed just last week, 27 out of the 31 local authorities nationwide confirmed to my Department and the CCMA that they act as data controller for these types of CCTV schemes.  I am told that the only local authorities who don’t yet appear to be doing so are Carlow, Cork City, Kilkenny and Laois.

So why are some people saying only six local authorities are acting as data controller for CCTV when 27 actually are?

Well I think two things are being confused here – funding of CCTV; and legal governance of CCTV.

It is true that the funding for community CCTV schemes has changed.  Funding used be available through Pobal, whereas now there is a funding scheme administered directly by my Department.  Perhaps people believe, mistakenly, that only the counties signed up under the new scheme are accepting responsibility as data controller.  But as I said before, local authorities were also required to be the data controller for community CCTV under the Pobal funding scheme. So in fact that has not changed.

The second point which may be causing confusion is GDPR.  It could be that the advent of GDPR has made everyone more aware and perhaps a little more nervous about data protection and the risks of getting it wrong.  And that’s understandable. GDPR means anyone in possession of personal data needs to be even more mindful of things like data security, privacy and the rights of individuals.  But data protection law and privacy rights existed before now too.

And GDPR is certainly not a reason for anyone to portray the requirement for local authorities to act as data controller for community CCTV schemes as something new.  It is not new. There may be some different considerations now under GDPR, but local authorities are in any event already familiar with the requirements of GDPR which apply all throughout their ordinary work.  There is also guidance and assistance available them and their data protection officers, to help with this task.

One other claim I want to address is that all CCTV is a job for the Gardaí.

There is no doubt but that the help, support and co-operation of An Garda Síochána is required by any community group who would like to install a CCTV scheme.  And appropriate access by Gardaí to community CCTV schemes is an important part of the existing law governing these schemes.

Garda CCTV schemes are prioritised and situated where Garda management believe they are most needed - and that is not necessarily going to be in your or my small town or village.  The Commissioner as head of An Garda Síochána is independent. No minister, no politician and no community can direct the Gardaí to place CCTV anywhere. But what a community can do, provided their local authority is prepared to assume responsibility as data controller, is consult with the local Joint Policing Committee, get permission from the Garda Síochána and set up their own CCTV scheme to which Gardaí have appropriate access.

This structure empowers local communities to arrange for community CCTV in their locality, should they so wish.  It is what my Department has put a grant scheme in place to help happen.

Because the reality is that all of us, communities, local authorities, my Department and me as Minister, have the very same objective – safer and more secure communities.

Local authorities are free to decide whether or not to agree to take part in community CCTV.  My Department is already working with the local authorities nationwide, through the LGMA and CCMA, to address any queries that arise.  And I would hope that the small number of local authorities who are not yet acting as data controller will be able to do so in the future, so that every interested community can have their CCTV scheme approved.

I will ensure that every assistance is provided by my Department to help local groups do exactly that.

[Note: groups seeking to establish a community CCTV scheme in their locality can find further information on funding at the website of the Department of Justice and Equality, http://www.justice.ie  Guidance is also available through a dedicated email address communitycctv@justice.ie  ]