Laois TD and Minister Charlie Flanagan has €2.79 billion budget for policing, prisons and other justice areas 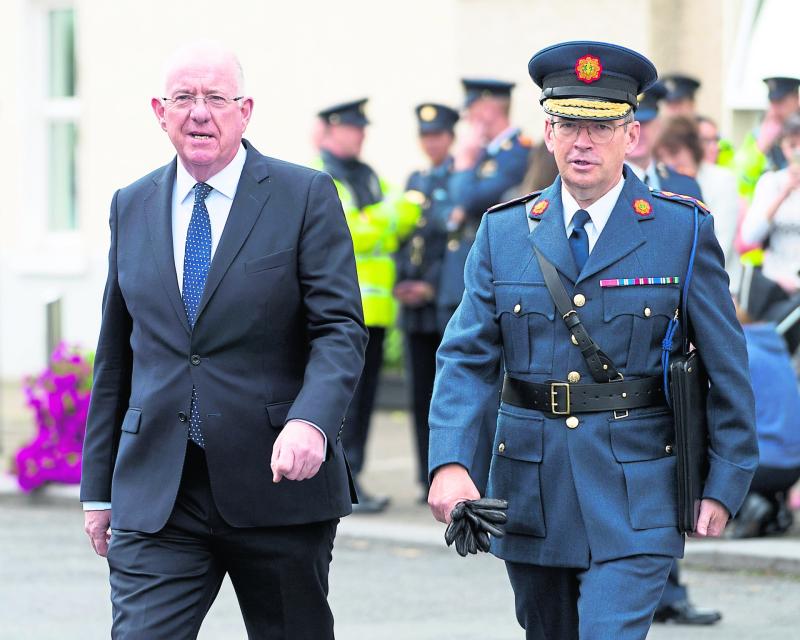 Laois TD and Minister for Justice Charlie Flanagan will oversee the budgetary allocation of €2.79 billion justice sector in 2019 - up 8% on 2018 budget allocation

Minister Flanagan has also welcomed a €2.57 billion allocation for in day-to-day spending next year increase of €139 million, according to a statement from his Department.

Spending includes €10 million additional funding for Justice and Policing Transformation Programmes as well as finding for ongoing recruitment of Gardaí and Garda civilian staff to continue in 2019.

The Minister for Justice and Equality, Charlie Flanagan TD, and the Minister of State welcomed the increased resources for 2019.

“The increased funding for the Justice sector in Budget 2019 reflects its importance in the day to day lives of Irish people and the Government’s commitment to justice and equality.  This is a diverse sector with many challenges and the funding provided for 2019 will provide the tools to address many of those challenges in a responsible and sustainable way.

“I am particularly pleased that a specific additional budgetary allocation has been made available for the Justice and Policing Transformation Programmes.  This funding will enable the commencement of the implementation of the report on the Commission on the Future of Policing in Ireland and the completion of the restructuring programme in the Department of Justice and Equality.”

The Garda budget has increased by €110 million from €1.65 billion to €1.76 billion. Budget 2019 provides for the recruitment of up to 800 new Gardaí and for further civilianisation to fill skills gaps and enable the further redeployment of Gardaí to frontline duties.

An additional €3.5 million for training and €1.5 million related to the deployment of Garda Mobile Technology - handheld devices to process information in real-time.

An extra €72 million has been provided for Garda payroll costs bringing the total to €1.05 billion. Up to €95 million available for the overtime budget of An Garda Síochána

Minister Flanagan stated: “Since the re-opening of Templemore College in September 2014, we have been rebuilding the Garda organisation and I am pleased that the strength of An Garda Síochána will reach over 14,000 members by the end of 2018 for the first time in many years.  I welcome the provision of funding to facilitate the continuing recruitment of up to 800 more Gardaí in 2019 along with necessary civilian Garda staff.

“The work of the Commission of the Future of Policing in Ireland sets out a blueprint for the transformation of policing in Ireland.  This report, on one of the key functions of the State, was delivered after lengthy and detailed consideration and consultation by a team of experts.  I am currently analysing the far reaching recommendations and consulting with stakeholders with a view to bringing an implementation plan to Government later this year.  Budget 2019 provides funding to facilitate the commencement of that implementation process.”

“I fully appreciate that, as part of the reform programme, the Commissioner will need to consider all aspects of the funding requirement in the Garda Vote and how all resources at his disposal can be best deployed including in relation to the composition of the Service.”

Minister Flanagan pointed out that Budget 2019 provides for the continuation of unprecedented levels of capital investment in An Garda Síochána. He said: “I am pleased that under the National Development Plan and the overall vision in Project Ireland 2040, the Garda capital allocation has increased from €61 million to €92 million in 2019, a 50% increase. This will facilitate investment of around €65 million in ICT which is now an important element of the fight against crime – this substantial investment will provide new and leading edge technology to support our front line Gardaí in their daily work. In addition, the Budget provides for a further €10 million investment in the Transport Fleet and €17 million in the Garda Building Programme. This capital investment is a key enabler in the reform programme and will be one of the main pillars on which the future of policing will be built.”

An additional budget of €80 million has been made available in 2019 including €34.5 million in capital for the new Forensic Science Laboratory, increasing the budget for the Minister’s Vote to €524 million. While a large proportion of the additional funding is in response to demand-led budgetary pressures in areas such as Criminal Legal Aid (up €12 million to €61.3 million), Reception and Integration Agency accommodation costs (up €4 million to €70.6 million) and increased workloads and processing volumes in the Immigration area (up €2.6 million to €71.4 million), it has also been possible to allocate additional funding to a number of key front-line regulatory and other areas in the vote.

A further €0.7 million has been provided for the Criminal Assets Bureau to fund additional staffing resources assigned to the Bureau. This brings the total budget for CAB to €8.6 million for 2019.

Further funding of over €1.6 million has been made available to GSOC including a re-profiling of existing budget (€1.0 million) as requested by GSOC and the provision of new additional funding (€0.6 million) bringing the total budget to €10.7 million. This will enable additional staff to be recruited in respect of its investigative and administrative functions and to further expand the Unit established to deal with Protected Disclosures.

Additional funding of over €3.5 million provided for Equality measures

An additional €1 million in funding is going to the Magdalene Restorative Justice Fund, stating that any additional requirements in this area will be monitored closely throughout 2019.

An additional €3.6 million is being provided for the Data Protection Commission bringing the total budget to €15.3 million. This additional budgetary allocation builds further on the funding increases in recent years and reflects the fundamental transformation of the data protection landscape. The functions and responsibilities of the Data Protection Commission have been radically redrawn and expanded. The increased resources also reflect the importance of a strong regulatory data protection framework to underpin the continuing expansion and growth of Ireland’s digital economy.

Additional funding of over €1.5 million has been made available to the Probation and Irish Youth Justice Services in 2019. The total budget for these areas in 2019 is just under €61 million.

The additional funding provided to the Probation Service includes €0.5 million for the implementation of a Housing First Project being undertaken in conjunction with the Irish Prison Service for the provision of accommodation and support for up to 75 hard to house prisoners.

The additional funding for the Irish Youth Justice Service of €0.5 million will enable additional initiatives to be undertaken to divert young people at risk away from crime and anti-social behaviour.

Other agencies and bodies in the Justice Vote

In anticipation of the enactment of the relevant legislation during 2019, start-up funding of €0.25 million has been provided for both the Judicial Appointments Commission and the Judicial Council.

An additional €2.6 million has been provided to INIS bringing the overall budget to €71.4 million in 2019. This funding will mainly supplement the existing ICT budget to provide strategic investments in key systems which will ultimately lead to process efficiencies through the reform programme in the Immigration area.

Additional funding of just under €18 million is being provided to the Prisons Vote in 2019 including €8 million in capital funding bringing the total vote to €359 million.

From a total capital funding budget of €32.3 million, it is expected that significant progress will be made on the redevelopment of Limerick Prison with in cell sanitation and a dedicated standalone new female prison for the Munster region.

The additional current expenditure of almost €10 million includes €7 million in respect of additional payroll costs and to recruit both prison and administrative staff to enhance delivery of services and the implementation of updated business processes throughout the prison service.

The remaining additional funding is to meet non-payroll costs in areas such as a maintenance programme for the Prison estate.

An additional €6.8 million is being made available to the Courts Service in 2019 bringing the total gross allocation to €138.4 million.

Courts Service will be able to utilise at least €2 million of the additional funding for recruitment of staff including those with the skills to enable the Courts Service to successfully implement a number of key ICT and reform projects in 2019. These include projects such as e-licencing, e-probate and expanded use of courtroom technology. The successful implementation of these and other similar projects has the capacity to reduce or more effectively deploy staffing resources currently engaged in heavily paper based processes ensuring a more efficient service for all stakeholders.