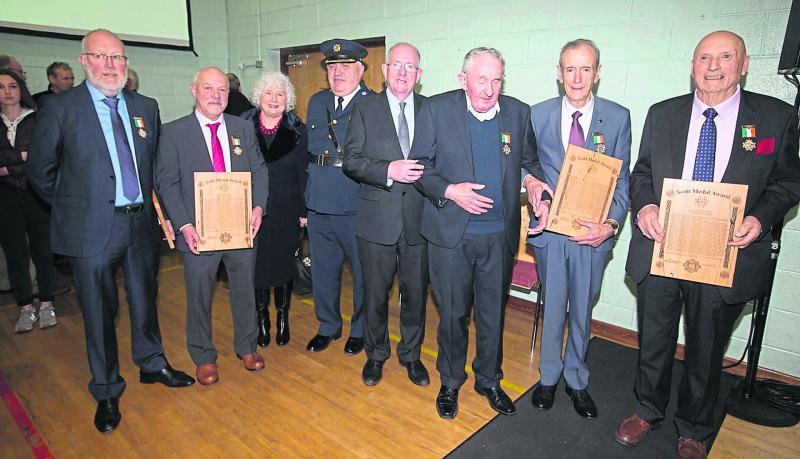 Mnister for Justice Charlie Flanagan and Chief Supt John Scanlon with Tom Peters and other Laois Offaly Gardaí and family at the Scott Medal presentation in 2017. Picture: Alf Harvey

The lifelong injuries suffered by the late Portlaoise Garda Detective Tom Peters demonstrate the futility of violence, according to the Chief Superintendent of the Laois Offaly Garda Division.

Chief Supt John Scanlon, the Minister for Justice Charlie Flanagan and Garda Headquarters have paid tributes to the retired detective who died on Saturday, October 20.

On October 16, 1976, Det Peters was among five Gardaí blown up by an IRA bomb at Garryhinch on the Laois Offaly border. One garda, Michael Clerkin was killed instantly while Det Peters suffered extensive injuries which culminated in the loss of his sight and hearing.

Both Chief Supt Scanlon and Minister for Justice Flanagan were present in November 2017 when Det Peters was presented with his Scott Medal for bravery with his colleagues and the relatives of Michael Clerkin.

Chief Supt Scanlon extended sympathies to the Peters family, wife Betty and daughters Elma and Breidette. He said it was important that Tom's bravery was honoured at the Garda College in Templemore last year.

"Our thoughts are with his wife and family who cared for him over the last 40 years. I met Tom and his family a number of times and knows how much it (the Scott Medal) meant to him," he said.

Chief Supt Scanlon said the injuries suffered and endured during Tom's life should be seen in the context of violent times.

"He was the living embodiment of the futility of violence," he said.

Chief Supt Scanlon said it was important that such attacks are not airbrushed out of history.

"We should forgive but we should never forget," he said.

Det Peters and his colleagues were called to Garryhinch after Portlaoise Gardaí received a tip-off that Minister Flanagan's father and then TD, Oliver J Flanagan was to be targeted that night.

"He was a garda who displayed great courage and bravery in the performance of his duties. I want to acknowledge that he paid a huge sacrifice and displayed great fortitude in the years since," said Minister.

Minster Flanagan extended his sympathies to the wife and family of the late detective.

A statement from Garda Headquarters in the Phoenix Park also paid tribute.

"An Garda Síochána is saddened to hear of the passing of Tom Peters. The courage shown by Tom Peters and his colleagues, Jim Cannon, Ben Thornton, Gerry Bohan & Michael Clerkin, who lost his life that night, was recognised in December 2017 when they were presented with the Gold Scott medal by the then Garda Commissioner," said the statement.