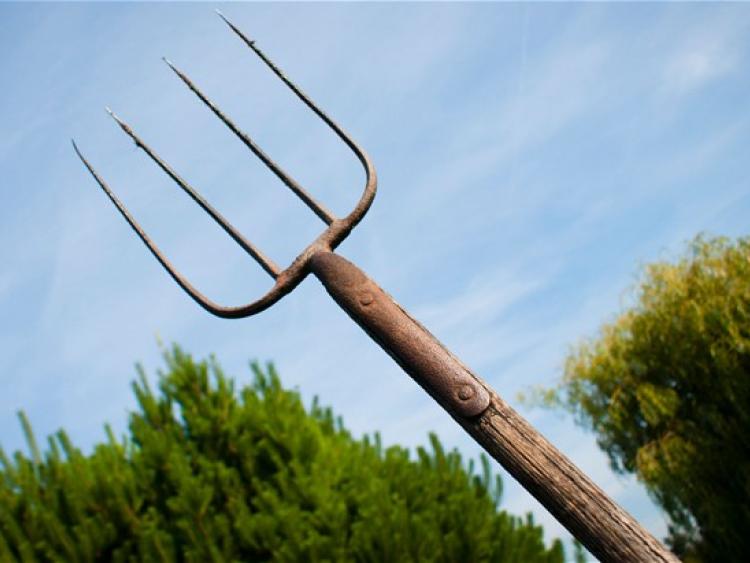 A man has had his sentence for aimlessly throwing a pitchfork, which bounced off the ground and struck a woman in the lips, cut on appeal.

Stephen Brophy (27) with the last address in Kirwan Park, Mountmellick, pleaded guilty at Nenagh Circuit Criminal Court to violent disorder and assault causing harm at Ashbury View, Roscrea, on a number of dates in 2015. The prosecution arose out a feud between two families, the McCarthy/O’Donoghues and the Hutchinson/Marshalls, in Ashbury View, Roscrea.

Judge Thomas Teehan sentenced Brophy to seven years imprisonment with the final two years suspended on condition he keeps the peace for seven years post-release and not approach a member of the McCarthy family unless expressly invited or in a friendly manner.

Brophy successfully appealed his sentence on Thursday and he was accordingly jailed for two years.

Giving judgment, Mr Justice Patrick McCarthy said Brophy was a member of the Hutchinson/Marshall family, and there seemed to be deep hostility between them and the McCarthy/O’Donoghues at the time.

On January 13, 2015, he said the gardaí attended Ashbury View where the Hutchinson/Marshall family told them they had been attacked by the McCarthy/O’Donoghues and that the latter had retreated to their home.

He said people emerged with slash hooks, iron bars as well as timber stakes and what might be described as “a riot” took place. Gardaí attempted to separate the “warring factions” and assistance was required. Many items were thrown, there was much name-calling and “baiting of the other family to fight”, the judge said.

Similarly, the following June, gardaí observed that a premise belonging to the McCarthy/O’Donoghues had been damaged and some members of that family were described as being severely injured. They demanded the Hutchinson/Marshalls to “come out and fight”.

Again, Mr Justice McCarthy said the gardaí, in attempting to separate the protagonists, were in “great danger” and had to seek assistance from colleagues. It was two hours before they succeeded in calming things down.

He said Brophy had thrown a pitchfork while stripped to the waist which bounced off the ground and struck a Sharon McCarthy in the lips. She required surgery and was left with a visible scar.

It was accepted the pitchfork wasn’t aimed at anyone in particular but rather by chance had struck the injured party, the judge said.

Mr Justice McCarthy said more than a dozen people were sentenced at the same time and Brophy was the only one to have received a custodial sentence.

He said Brophy’s connection with the families had come to an end and was living in another part of the country. Before the matter came to the Circuit Court, there was an attempt at mediation to restore the good relations that had existed between the families previously, the court heard.

The judge said the use of consecutive sentencing was inappropriate and, furthermore, that the length of the sentences breached the totality principle.

Brophy was required to enter into a good behaviour bond for two years post-release and not approach a member of the McCarthy family unless invited or in a friendly manner. He undertook to be so bound.