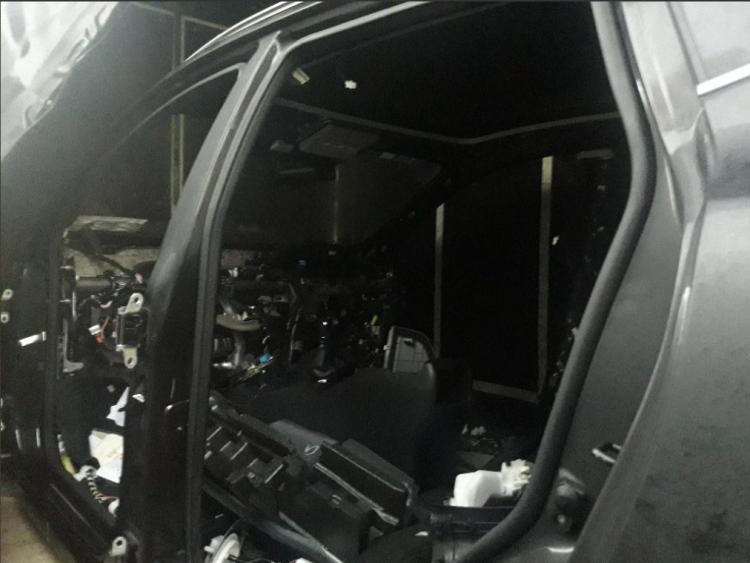 Car being dismantled in chop shop uncoved in Kildare in early October.

Gardaí have sealed off premises on the Laois Kildare border which its believed was operating as an organised crime 'chop shop' for stolen cars.

A man, who is aged in his early 30s but not local, was arrested on Thursday morning, October 24 in the Ballylinan area of east Laois on the Castlecomer road.

He was detained at a location where Gardaí believe stolen cars and other vehicles were being disassembled for the purpose of selling on part possibly overseas.

Gardaí have not ruled out the possibility the some of the cars were being broken down for reassembly in other countries.

While Gardaí are keeping an open mind on the mater, it is suspected that the operation was linked to organised crime and that the cars were being stolen in Dublin.

The man who was arrested is being detained by Laois Offaly Division Gardaí who do not believe local people were involved.

Gardaí in Laois are leading the investigation but also involves officers from other divisions. Gardaí in Portlaoise and Ballylinan appealed to the members of the public who may have seen vehicles coming and going towards the premises to contact them on 057 8674100.

It is not believed that the operation was as extensive as the recently uncovered chop shops in Meath and neighbouring Kildare.

A large quantity of suspected stolen vehicle parts was seized on October 16 a number of premises were searched in the two counties.

As part of an operation a number of premises were searched on the 16th Oct 2018 in the Meath and Kildare areas. A large quantity of suspected stolen vehicle parts were seized. pic.twitter.com/747UA03eBE