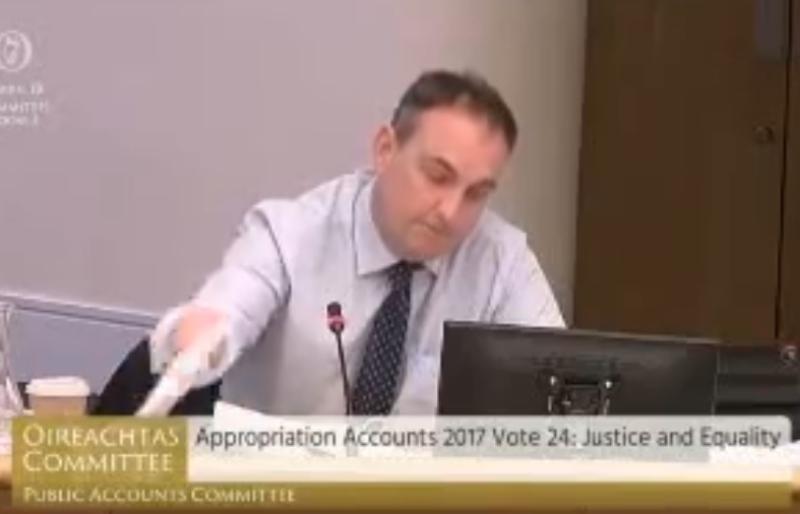 A file on possible wrongdoing by prison service employees is to be sent to the Garda Commissioner, the Department of Justice and the Data Protection Office.

The claims were contained in documentation raised with the Department of Justice Secretary General in the Dáil by Fianna Fáil TD Marc MacSharry.

The TD said the documentation contains details of surveillance of prison staff by prison authorities outside jails.

He read a statement into the record at the Public Accounts Committee public meeting with Justice officials which was chaired by Laois TD Sean Fleming.

The Sligo TD said had sought legal on advice the claims contained in the documents before deciding to raise it at the committee.

"The contents of this documentation are a matter of huge concern to me...They appear to be a list of profiles of people who may have been and may still be serving prison officers and contractors. It includes what I would describe as personal details and alleged wrongdoing.

"It gives detailed accounts of the movements of a person or persons in areas outside the prison environment with dates times addresses and vehicle registration numbers.

"The providence of this information if genuine, would implicate the operational support group of the prison service in surveillance and intelligence gathering outside the prison environment.

"Because of the nature and contents of these documents, I will today forward a copy to the Garda Commissioner, the Data Protection Commissioner and the relevant authorities and naturally this is a matter of huge concern to me," he said.

Dep McSharry also asked the Department officials about their awareness of the actions of a member of prison service staff.

"Can I ask if the Department is aware of an instance of a prison employee with the responsibility of stores in any of our prisons was selling stores items on the internet?

"Can you confirm whether this person was simply allowed to resign as opposed to being subjected to the appropriate Garda investigation, prosecution penalties and loss or recovery to the state?

"And, if the Department is not aware can you make all necessary enquiries?" concluded the TD.

He also asked questions about what happens with products made and sold in prisons. He also asked if prison materials has been used to make improvements to the homes or holiday homes of staff.

Dep MacSharry also raised questions over possible nine incidents of sexual harassment between staff or by a prisoner against a prison nurse. He asked if the Department would carry out a confidential of female prison staff.

The TD also asked for answers on allegations on the use of up to €25,000 from the tuck shop of a Dublin prison to fund a trip by prison staff to a sporting event in the United States.

He also called for a GSOC style body to be set up to investigate issues involving prison staff.

He said prisons were operating as islands and the Irish Prison Service HQ in Longford are "only as good as the information provided to them".

Laois TD Sean Fleming said that he has a duty to send a transcript of what is being said to the Garda Commissioner.

"Given that there is a suggestion of criminality here I have a duty to send this to the Garda Síochana," he said.