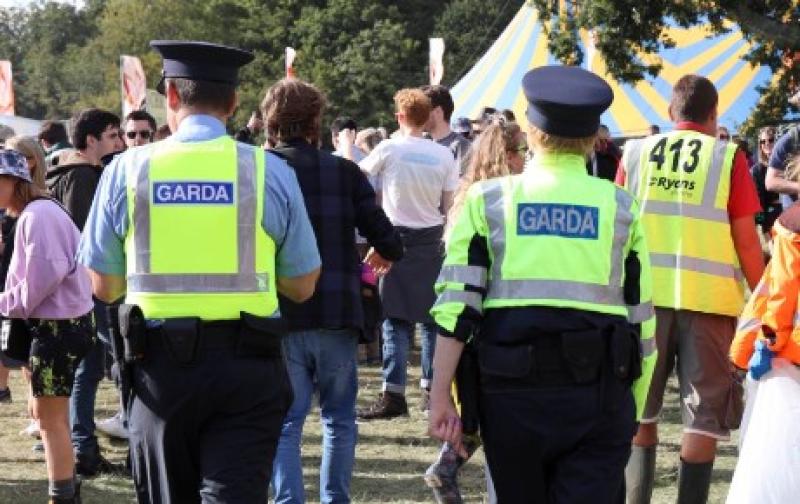 Gardai on duty at the Electric Picnic. Picture: Alf Harvey

Drug possession offences represented the bulk of nearly 500 incidents attended to by Gardaí at the Electric Picnic in Stradbally according to preliminary figures.

Laois Offaly Garda Division have also confirmed that two people had to be hospitalised and were in a critical condition after taking drugs at the event. Separately, they detained one person on Sunday on suspicion of an intent to supply about €3,000 worth of drugs.

The Gardaí are also investigating a suspected sexual assault on a female. In an unrelated incident, they detained a man carrying a knife who had been wanted in relation to other offences.

As of 10 am on Monday, September 2 Gardaí said they have dealt with 497 reported incidents associated with Electric Picnic.

Of these, 453 related to offences drugs offences. Most of these involved possession for personal use but a small number of others were detained on suspicion of intending to supply. Among those arrested was individual on Sunday who had cocaine, ecstasy, ketamine to the value of €3,000.

A total of four arrests were made for the offence of driving while under the influence of an intoxicant, three of those relate to drug driving.

Gardaí said one male was arrested in possession of an offensive weapon while leaving a car park and subsequent inquiries revealed the existence of two outstanding bench warrants. This male is in custody and is currently awaiting a court appearance.

While there were a large number of medical issues with patrons being treated for various ailments including adverse effects of alcohol and drugs. There were two transfers to the Midland Regional Hospital Portlaoise of patients who Gardaí said had been resuscitated and deemed critical.

Both these patients have since stabilised according to Gardaí who say they retain contact with both families having provided family liaison services.

Gardaí confirmed that they are also continuing to investigate one sexual crime which was reported during the festival and are continuing to support the victim at this time.

There were six public order offences. There was one minor assault and one theft.

Gardaí say the traffic plan created and executed for the event was successful to date with minimal delays encountered by motorists. Garda would like to thank all those who attended at the event for their co-operation and compliance with the traffic plan.

Garda Inspector Eamon Curley told the Leinster Express that the event was on a par with previous years in terms of incidents attended to at the festival which he said involves more than 60,000 people.