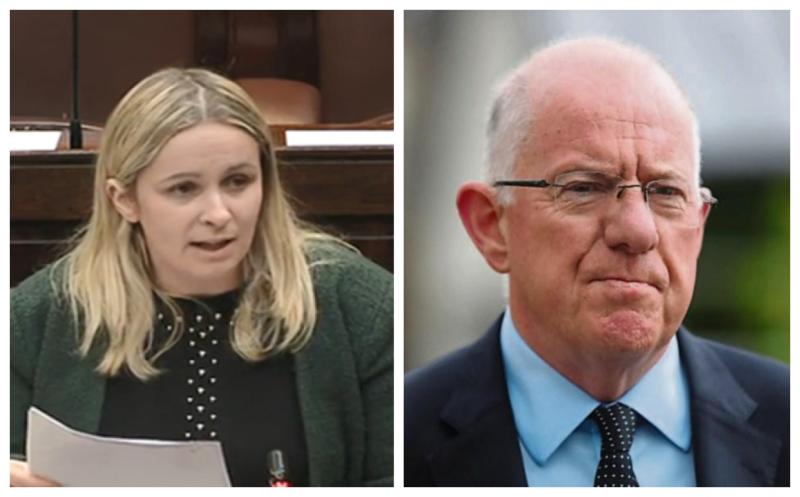 Laois TD and Minister for Justice Charlie Flanagan has hit out at Offaly TD Carol Nolan for her criticism of the big shakeup in Garda divisions across the country.

Deputy Nolan said the "restructuring plan for Laois/Offaly may cause more problems than it solves."

However, the Laois TD said she was 'irresponsible' and it was wrong for her to turn reform into 'a cheap political football'.

The former Sinn Féin TD expressed concern over plans for an ‘Eastern Division’ that could align Offaly and Laois with Counties Kildare, Wicklow, Meath/Westmeath.

"To my mind, and indeed to the minds of many ordinary rank and file members of the Garda Representative Association (GRA), these proposals need to be urgently reconsidered," she said.

"How is that situation going to be improved if we actually expand the geographical size of the area for the gardai to cover?" she queried.

Responding to the criticism, Minister Flanagan, who oversees the Gardaí, said he founds the comments of the Offaly TD "very disappointing."

"It is irresponsible and wrong to turn policing decisions aimed at delivering better services to people on the ground into a cheap political football," Minister Flanagan stated.

He said the Commissioner’s announcement marks significant progress in the implementation of the recommendations of those independent expert bodies.

"As I am sure Deputy Nolan is aware, the new model will provide more visible Gardaí on the front-line, protecting and supporting our communities; shift more power and decision making from Garda Headquarters to Chief Superintendents leading Divisions, closer to the communities they serve; ensure we have a more localised and responsive police service reflecting local needs; and streamline administrative services and reduce bureaucracy."

"The new model includes plans for recruitment of 1,500 more Garda recruits and 1,000 more Gardaí re-assigned to more operational lines at the front-line by 2021. The model will see an increase in Garda sergeants and inspectors on the ground in community and a decrease in duplication and bureaucracy at senior management level."

"It is also important to note that in the new model, Superintendents will continue to be based in key locations throughout Divisions and will not be centralised in the Divisional Headquarters."

"The new divisions will have dedicated expertise in a range of specialised areas including sexual and domestic violence; cybercrime and economic crime."

"And so while under the new model counties might be merged, the new Division will provide an even better policing service, as it will now benefit from a reduction in bureaucracy and devolution of real power from Garda Headquarters," Minister Flanagan explained.

Responding to the Minister's rebuke, Deputy Nolan said: "The Minister’s claim that I have acted irresponsibly in raising concerns around the proposed garda restructuring has no basis in reality and needs to be withdrawn."

"Also, it is more than a little ironic that he accuses me, again, without a shred of evidence, of turning a vitally important garda issue into a 'cheap political football,'” she added.

"This from a Minister who has been a member of two governments that have been convulsed by questions of Ministerial or Departmental incompetence with respect to garda matters," she claimed.

"The fact of the matter is this; it is not my role to act as a cheerleader for government policy or any policy simply on the basis of where it originates from."

"My role, which I fulfil unapologetically, is to advance the interests of my constituents and to highlight their concerns around the capacity of any new proposals to tackle issues like rural farm crime or incidences of crime in general," Carol told the Offaly Express.

"If the Minister had carefully read my initial statement, he would have seen that I made no definite conclusions but was merely asking questions and urging reconsideration on the basis of the evidence presented to us; questions which in substance have remained unanswered."

"I would also remind the Minister that the Garda Representative Association (GRA) itself, in its own reply in late August to the restructuring proposals welcomed Garda Commissioner Harris’s indication that 'he is open to considering feedback.'”

"The Garda Commissioner also assured the GRA that the plan 'is not necessarily the last word on this issue and that the views of the GRA and others will be considered.'"

"That is the kind of confident and engaging attitude I would encourage Minister Flanagan to imitate, instead of throwing unfounded accusations my way," Carol remarked.

"Let me be clear; if the final form of the proposals definitively brings about higher rates of garda visibility, substantial increases in garda numbers for Offaly and Laois and a marked reduction in rural crime, then the Minister and indeed the Commissioner will have my unqualified support."

"As of now, the process is still ongoing, and those outcomes are far from guaranteed. That is why I will continue to voice the concerns of the people who come to me irrespective of the political sensitivities of the Minister for Justice," she concluded.

Dep Nolan was not the only TD who has criticised the changes.

Laois Fianna Fáil TD Sean Fleming issued a withering attack. He said it would not take a 'genius' to see that the reforms would lead to less police in Laois and Offaly.