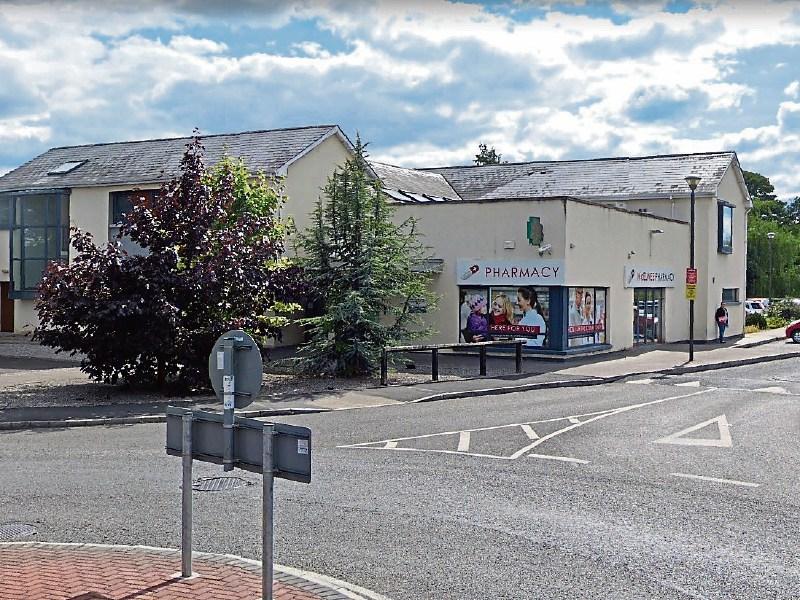 McElwee's pharmacy in Portlaoise which was broken into and robbed.

Three rural Laois primary schools and a Portlaoise pharmacy were all broken into within a seven hour period over the Halloween break, with Gardaí suspecting the same gang.

The first break-in alarm sounded at The Rock National School near Mountmellick at 9.55pm on Wednesday night October 30, with the office ransacked, a glass door smashed but nothing else taken.

Then at 11pm Ballyfin NS alarm went, with windows smashed.

At 4.10am Tobar an Léinn NS in Raheen near Abbeyleix was hit.

At 5am McElwee's Pharmacy on the Mountmellick road in Portlaoise was broken into, and a safe and jewellery were stolen.

Garda Superintendent Tony Petit said so far they believe all are connected.

“Indications are they were probably done by the same group. At least two were involved, with a vehicle. We have recovered items we believe were used to break in and a piece of clothing left behind. We believe they were either local or had local knowledge as the schools are relatively rural and hit in a small space of time,” he said.

The pharmacy and one of the schools spoke to the Leinster Express as they were still reeling from the effects.

At McElwee's Pharmacy at the Cedar Clinic, CCTV is helping with investigations.

In just six minutes they had left with jewellery worth about €1,000 and a safe containing several thousand euro.

Pharmacist Peter McElwee said his staff are shook by the robbery.

“Our staff are all very upset. They run a good shop. We had only just completed a rebranding and they were very proud of the work they had done that day,” he said.

He is hopeful that Gardaí will be able to catch the offenders.

“The CCTV is quite good. You can see details of clothing, although their faces were covered with hoods,” he said.

A blood sample has also been recovered from the scene.

“They had to physically lift our timelocked bolted safe, drag it across the floor to get it to the door. It is possible that a third person wsa there out of shot to help get it into a vehicle. It is not an easy safe to open. The Gardaí knew the model and told us it would take some time to open,” he said.

“Our security firm were there within a minute of them leaving, they could have passed them on the road,” Mr McElwee said.

“If anyone is offered Shira costume jewellery with no box, please let us know,” he said.

Further CCTV from the Cedar Clinic itself is being viewed by investigating Gardaí.

Just an hour earlier at 4.10am, the intruder alarm had rung out at Tobar an Léinn NS, a rural school in Raheen near Abbeyleix.

Principal Niamh Campion told the Leinster Express that a Board of Management volunteer then came to the school to discover two windows smashed and two doors damaged. Nothing was taken.

“Staff had to come in last Thursday and spend the day sweeping up glass to make it safe for the children. We are still finding glass. We had a fundraiser the previous Friday but the money was lodged straight away. We never keep money in the school. It's awful to think they would pick a school that is vulnerable for funding to do such damage. We hope if there was someone passing they might have seen something,” Ms Campion said.

Portlaoise Gardaí are asking for anyone with information to contact them.

"We appeal for any sightings between 10pm and 5am. If anyone has CCTV or dashcam we ask them to check it," Supt Petit said.