€100,000 of cannabis seized during latest phase of Garda crackdown 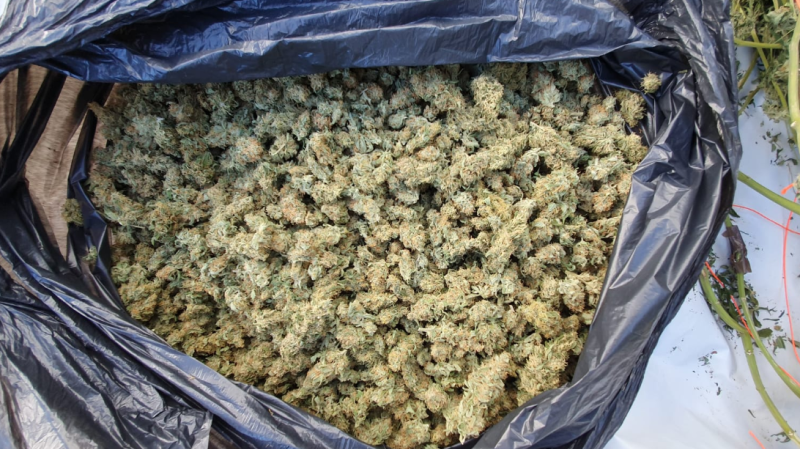 Laois Offaly Gardaí have seized nearly €2 million worth of drugs and made multiple arrests and carried out numerous searches in a month when three homeless people lost their lives after taking a batch of contaminated drugs.

The latest phase of the crack involved gardaí from the Laois / Offaly Divisional Drugs Unit and Portlaoise and Tullamore Detective Units assisted by members from Birr Garda Station.

Officers carried out a search at a house in the Birr area on Monday, May 11. This resulted in the seizure of more than €100,000 worth of cannabis herb.

It is the latest of several extensive operations mounted during the past month across the two counties and mainly in the bigger towns.

The first saw three arrests in Portlaoise on April 8 when €500,000 worth of cannabis, cocaine and prescription drugs was seized. Three people were arrested and charged.

On April 24, gardaí seized €1.24 million worth of cannabis herb in Laois not far from the border with Kildare and Carlow. It had been dumped in a ditch in the Arles and Ballylinan area.

A week later, on May 1 and 2, Gardaí seized drugs, cash, an imitation gun and made eight arrests as part of four drugs.

Nearly €15,000 worth of a variety of drugs were seized during the operation which focused on Portlaoise, Tullamore, Mountmellick and Portarlington.

Some of the arrests related to the investigation into the deaths of three people in Tullamore at a homeless hostel. Two women died on April 26 while a man died three days later in Tullamore hospital. Contaminated drugs purchased on the internet are understood to have been a factor in the deaths. All three had been housed by Laois County Council in emergency accommodation. A fourth man has recovered.

Another series of searches were carried between Friday and Sunday, May 8-10. Some €9,500 worth of drugs were seized while a man in his 30s was charged.

Investigations are ongoing while prosecutions are pending in many of the cases.