'Such fear, such random destruction' - Laois resident speaks about Halloween in estate 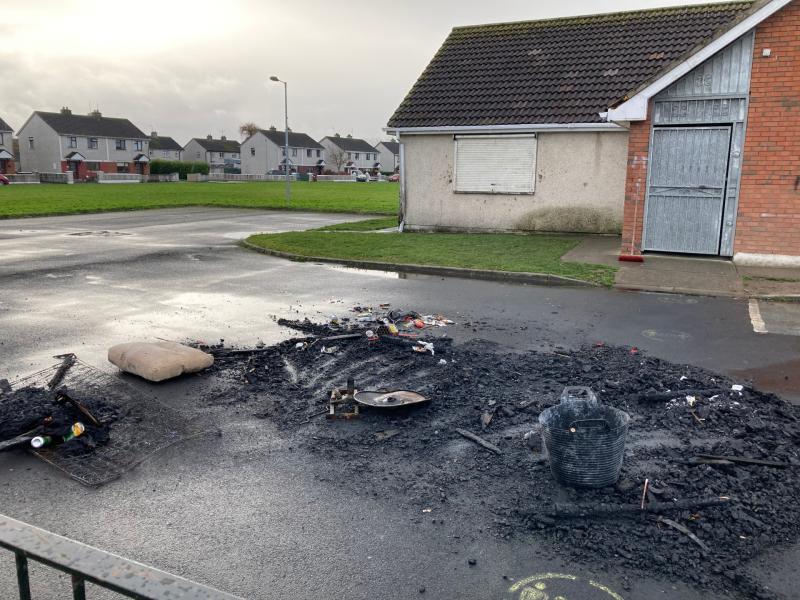 The remains of a bonfire beside the community building in Cullenbeg, Mountmellick

One of the elderly people living in Cullenbeg estate in Mountmellick, Laois described the chaos and violence that erupted last weekend when the authorities came to put out multiple dangerous bonfires set alight by crowds of youths.

“There was such fear, such random destruction. Young children were frightened and crying. The young lads were throwing bangers at the guards. Guards had to push them back to stop them pelting the firefighters with bangers.

“The firemen were coming under terrible siege. I'm here 14 years and I've never seen anything like it,” the resident told the Leinster Express.

He said that fireworks were aimed at houses and were still going off last Monday morning.

He said that after the first unlit bonfire in Smiths Field was removed by the authorities, many more were built closer to houses, some with gas cylinders, as well as one beside the community building that is used as a creche.

Seven people including some juveniles were arrested in the estate over the weekend.

Laois Fire Service reported that other than the Mountmellick events, which included some wheelie bins being set alight, Halloween was a quiet one across Laois.

“The local crew attended a bonfire in a Mountrath estate by request of the Gardaí, and Portlaoise another one in Kilminchy that was still burning after midnight. Apart from that it was reasonably quiet,” Chief Fire Officer Declan Power said.

Pleas had been made in advance of Halloween against bonfires and fireworks, not just because of the danger and illegality but to ensure health and emergency workers dealing with Covid-19 were not swamped by Halloween injuries.