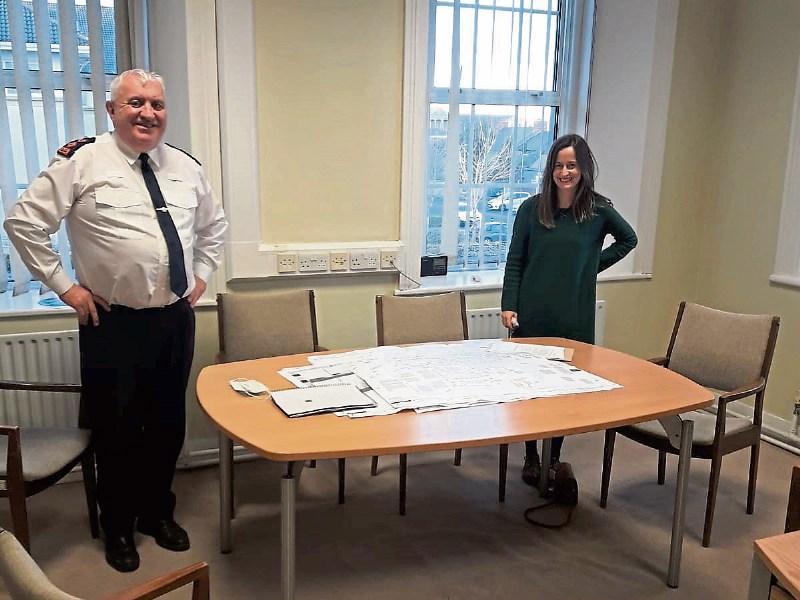 The location of a multi-million euro policing HQ in Portlaoise for what is the biggest Garda Division in Ireland will help to underpin the town and county's status, according to the top garda in Laois, Offaly and Kildare.

Garda Chief Superintendent John Scanlan was speaking this week after he met with the Office of Public Works and sealed the submission of a planning application for the building of a state of the art premises in the town.

The existing historic premises on the Abbeyleix Road will be refurbished and extended, but a new building will be constructed to the rear of the building as part of taking on the expanded role of being the HQ for the three county division which was formed this year.

Some demolition work will be needed on the site in Portlaoise including the knocking of an old gym to the rear of the building.

New premises will also be constructed at the prison campus in Portlaoise to accommodate Irish Defence Forces who owned and used the premises to the rear of the station.

The Office of Public Works, with significant input from senior architect Sandra Fitzsimons, has designed the new building in conjunction with Garda HQ in Dublin and Garda management in Portlaoise.

Chief Supt Scanlan has taken a lead role in driving the project.

“This is a milestone in the development of this project. The logic of planning means that this project is formally going ahead now. It is very welcome and gives us the capacity to deliver a professional policing service. It also provides critical infrastructure in the midlands for the Gardaí.

“In the new policing model this will be the largest division per population in the State by some 50,000 people. The amalgamated Laois Offaly and Kildre division has become the most populated division in the State,” he said.

The Garda chief said it would have spin-off employment benefits and raise the status of Portlaoise and Laois further as a key hub for Government provided services.

“For the next number of years it will provide jobs in its construction. It underpins Portlaoise as a critical part of Government infrastructure into the future.

“It will also mean some 40 to 50 support staff to support the frontline garda functions. So this means it brings more public service jobs to the town other than the Garda service,” he pointed out.

Former Minister for Justice and Equality and Laois/Offaly TD, Charlie Flanagan expects the plans to be submitted in the coming days.

“I am delighted that matters are progressing and the planning notice has been erected at Portlaoise Garda Station. When Minister for Justice and Equality, I was very keen to have this matter resolved and a new state of the art Garda Station constructed and it remains my priority as local TD. I want to acknowledge the unstinting commitment of local Chief Superintendent John Scanlon who has driven the project locally.

“In recent days I have been speaking to the Office of Public Works and officials in the Department of Justice in order to ensure that there will be no delay on this issue once the statutory planning time frames have been met,” he said.