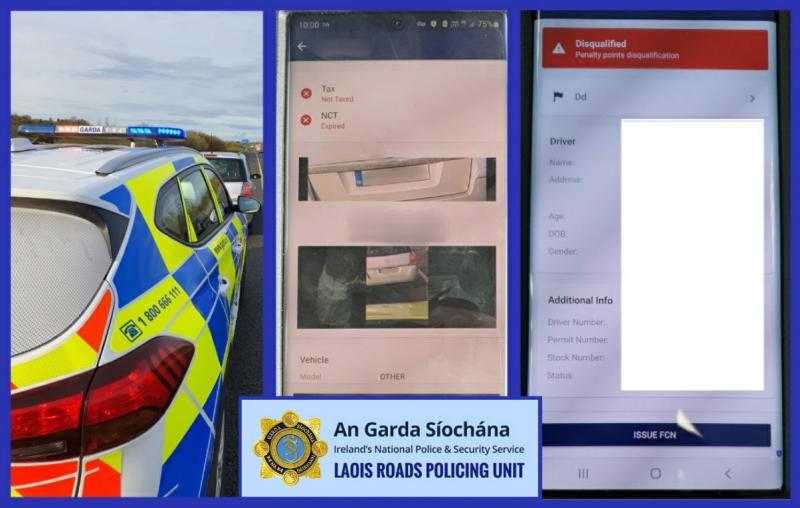 Number plate technology has helped Laois Gardaí apprehend a banned, uninsured motorist who was driving car on the county's road which hadn't been taxed in more than a year an half.

Gardaí issued a statement about the operation on Thursday, April 8.

"Laois Roads Policing Unit on patrol this morning were alerted through Automatic Number Plate Recognition (ANPR) Garda about a vehicle out of tax for 555 days.

"This vehicle was stopped and with the Garda Mobility App, the driver was discovered to be disqualified from driving as a result of accumulating too many penalty points.

They say it uses optical character recognition technology to automatically read vehicle registration plates and is used in patrol cars by many police forces worldwide. The technology can read number plates at a rate of six per second on vehicles travelling up to 180km/h.

The Gardaí add that such systems also include a speed detection capability. They say this allows for the measuring of the speed of a vehicle travelling in front of a patrol vehicle. The video camera records on-the-scene evidence of speeding, and offences such as dangerous driving, crossing continuous white lines and breaking red lights.

Garda HQ says that one of the main benefits of the system is that the plate recognition can run in the background while Gardaí are measuring speed or attending to other issues as demands dictate.

The gardaí add that systems, therefore, make a significant contribution to the fight against serious and organised criminal activity.

ANPR vehicles are now deployed in every Garda Division, with the number of vehicles allocated in each division based on various criteria including the type of roads, the amount of motorways and geographic profile.