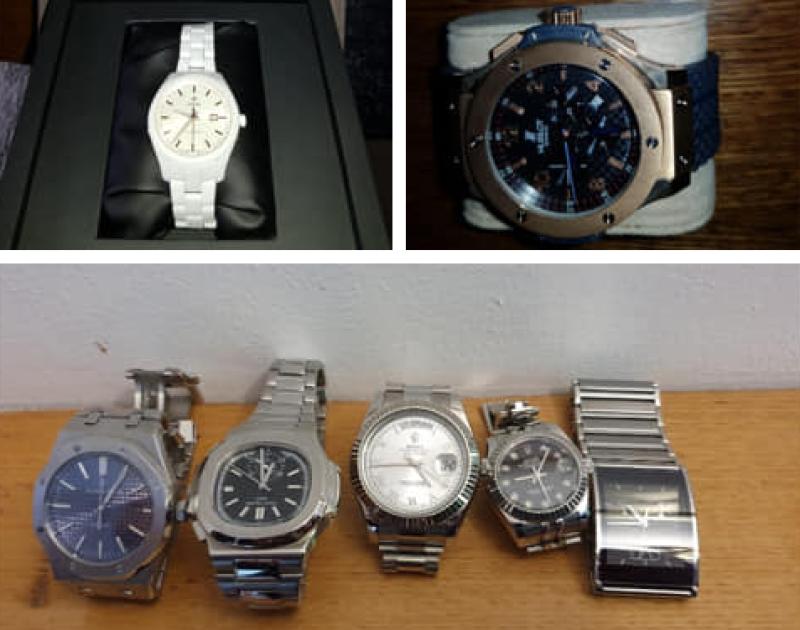 Some of the designer watches seized by Gardaí

Two people are due in court on Saturday in Portlaoise arising from a mult-agency operation in Laois and Offaly relating to criminality activity linked to Eastern Europe.

Gardaí say the man (30s) and woman (40s) were arrested in connection with a search operation that took place in the Midlands on Thursday, May 6 have now been charged.

They are both set to appear before Portlaoise District Court on Saturday afternoon at 1.30 pm.

It is understood that both are Polish nationals and were arrested in Portarlington with a search also carried out in Walsh Island in Co Offaly.

In the course of the searches, Gardaí said investigators seized €80,000 in cash, cocaine with an estimated street value of €210,000 along with a quantity of cannabis worth €10,000, and financial documentation. The drugs were sent for analysis.

Garda HQ said Thursday morning’s operation was conducted as part of an ongoing Criminal Assets Bureau investigation into property and assets funded with the proceeds of crime.

It said the assets identified include property that was accumulated by an East European criminal group involved in the sale and supply of controlled drugs in this jurisdiction.