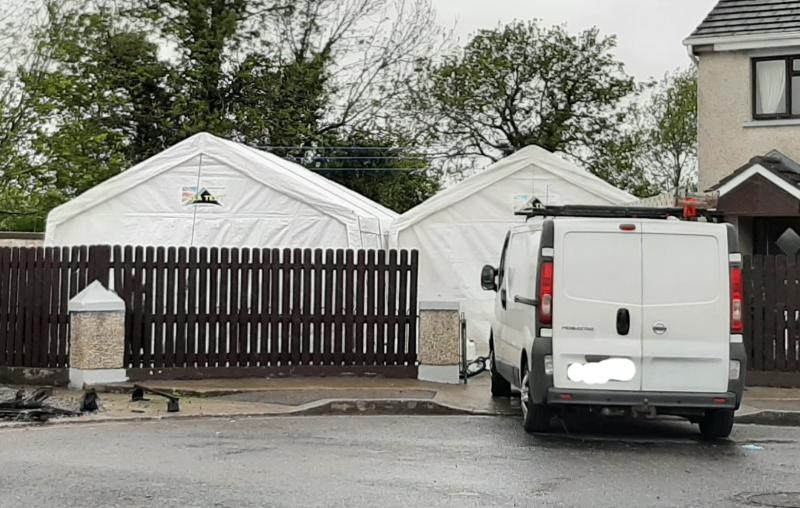 The double-marquee which was in place for a wedding party

A double marquee erected for a wedding party in Tullamore has been removed after Offaly County Council was granted a court order.

The wedding gathering was scheduled to take place this evening (Friday, May 21) on a site at the end of a cul-de-sac in the Chancery Close estate.

Preparations were underway on Thursday for the party and following the installation of the marquees, local suppliers were seen coming and going from the site, including a flower shop and a take-away business.

Following concerns expressed by a number of residents in the area, the County Council sought orders preventing the event at a Circuit Court sitting in Tullamore on Friday morning.

Judge Keenan Johnson granted orders allowing the removal of the marquees and stopping the gathering from happening in the Chancery Close area.

Judge Johnson was told the orders were being sought because the planned event would be in breach of Covid-19 regulations.

Gardai went to the site earlier this afternoon and the marqees were taken down.

A garda checkpoint was set up at the Church Road end of Chancery Lane later and at least one of the cars stopped had wedding guests on their way to Chancery Close.

The marriage is believed to have taken place in the afternoon in the north of the country.

The Covid-19 wedding regulations currently in force state that up to 50 people can attend a wedding service but the maximum attendance permitted at an outdoor reception is 15.

A maximum of six can attend an indoor reception.

The Offaly wedding party ban came just 11 days after Judge Johnson ordered a number of people involved in a Longford wedding to pay compensation after a reception took place in spite of a court order seeking to prevent it.

Judge Johnson said the the actions displayed by those involved in the hosting of the Longford wedding celebrations were premeditated and had run the risk of turning Longford into a Covid-19 blackspot.