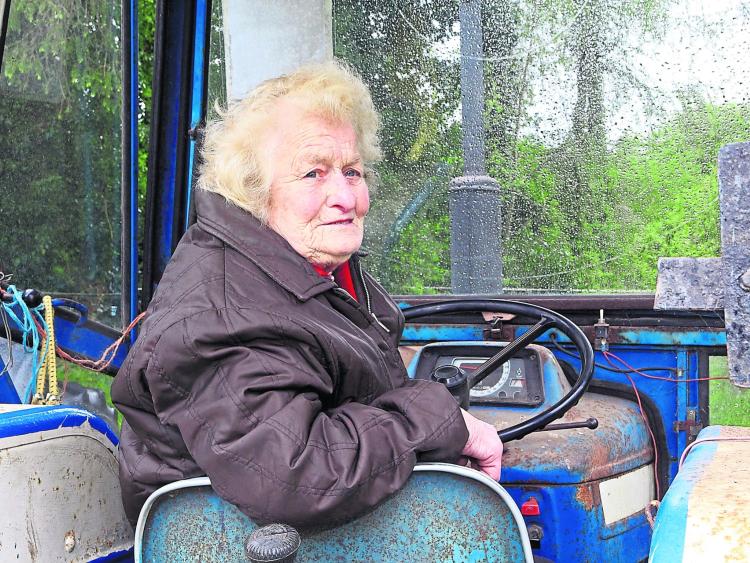 Hannah Dooley at work on the farm

The sudden passing of Hannah Dooley cast a shadow over the Coolrain, Camross and the wider community last week. Hannah (nee Farrell) was born in 1924 in Wexford but spent most of her life in Coolrain, after she married Denis in 1962.

From being a mother to her two sons, Michael and Pauric, Hannah had to take charge of the farm on the edge of Coolrain village when Denis passed away in 1996.

With her two sons Michael and Pauric, life moved on and Hannah adapted to outdoor life. Of course Hannah had been part of farming with Denis and they had a comfortable home. The two sons soon decided life on the farm was good and healthy, but neither felt their future was feeding cattle and ploughing for root crops. Michael joined the prison service and Pauric furthered his education and soon located in Dublin and went on to be an engineer with the ESB.

Hannah carried on living and farming at her home and, being a competent driver of any machinery, she was quite content, with good neighbours always willing to help out. Hannah was a member of the ICA for many years - she would drive to the local national school to give tuition on whatever subjects they choose.

Vintage machinery was another love of hers and was behind the formation of the Coolrain vintage club that raised money for many organisations. Hannah was also a long time promoter of the Camross lotto and she seldom missed a Monday night with her tickets.

However, when she failed to show on Monday last neighbours were worried, although she had been about the farm all day and admiring ten young cattle she recently purchased. However, when they got no reply at the house they went in to find her lying on the stairway and, after medical assistance rushed to the house, they confirmed their worst fears. In her 95th year Hannah’s heart had stopped beating.

Just a month ago Hannah had flown to England for the funeral of her sister Maureen and, on Tuesday evening, her only remaining sibling sister Sheila travelled from London to join the hundreds of mourners in attendance at the family residence.

On Wednesday morning the famous Massey Ferguson led the funeral cortege up Annough Hill, the famous landmark beyond the sawmills where Hannah had driven in various modes of transport. Now another means of transport brought her on her final journey to St Fergal’s Church where she worshipped all her years through thick and thin.

The beautiful singing began with 'Somewhere beyond the Rainbows end' and concluded with 'Lovely Laois.' Guards of honour greeted her arrival by the ICA, Active Retirement and the children from the national school.

Fr Lalor welcomed the remains draped in the flag of the ICA and Coolrain vintage.  The Church was packed as the various readers said their pieces and, among the gifts carried to the Altar, was her wedding day photograph and a certificate that recognised her contribution to the village, presented by fellow Laois woman Eileen Dunne.

Fr Lalor was joined on the Altar by Fr Ray O’Riordan, Chaplain at Cork Prison. After Mass, Hannah was laid to rest in the adjoining cemetery. Chief mourners are her sons Michael and Pauric daughter-in-law, grandchildren Shauna, Alanna, sister Sheila, nieces, nephews, extended family, great neighbours and a large circle of friends.

Hannah Dooley was interviewed by the Leinster Express in November 2014.

We reprint that article here:

Farmer Hannah Dooley from Coolrain seems to have found the secret of eternal youth, and it is simple, hard work and fresh air.

Farmer Hannah Dooley from Coolrain seems to have found the secret of eternal youth, and it is simple, hard work and fresh air.

The grandmother still hops up into her beloved Ford 2600 daily, to tend to her cattle, despite being at an age when most people would be delighted just to be able to hop up out of the armchair.

Mrs Dooley prefers not to reveal her age, though was none too happy when the local priest Fr Lalor commented from the altar about her breaking the driving age limit of 90 years.

“I was ruined altogether,” she said laughing on the phone to the Leinster Express.

A Wexford native, Mrs Dooley came to Coolrain after she married, and had two sons. Her husband Denis passed away  but she continued to work their farm, herding and feeding her cattle.

“I enjoy doing the farm work more than kitchen work, I like being in the open air. If I couldn’t drive I’d be lost, I can go up the lane and look at the cattle, and with the sun and the birds, what more could you ask for,” she said.

She is grateful for her health.

“Thank God I am in great health, but I don’t drink and I don’t smoke, I never did,” she said.

Hard work is her secret.

“Hard work and keeping moving no matter what. I couldn’t come in and sit down in the kitchen all day,” she said.

While treasuring the quietness of the countryside, Mrs Dooley is deeply involved in her community.

“I am quite active, I am in the ICA, Community Alert, the over 60’s club, anything that’s going on. I enjoy the local music too, and I go dancing to Camross once a month, I don’t know where I find the time,” she said.

Mrs Dooley also takes her tractor out to vintage days, being a member of the Coolrain Vintage Club since it formed.

“I must be surely the oldest member,” she said.

“Community is very important, especially at present. My neighbours are wonderful, they are there when I need them,” she said.

Mrs Dooley also finds time to do her own baking.

“I have lots of apples at the moment I am trying to get rid of, but the animals will get some, nothing goes to waste” she said.

Cats and dogs are in her care too. “Apart from company they are a great safeguard,” she said.