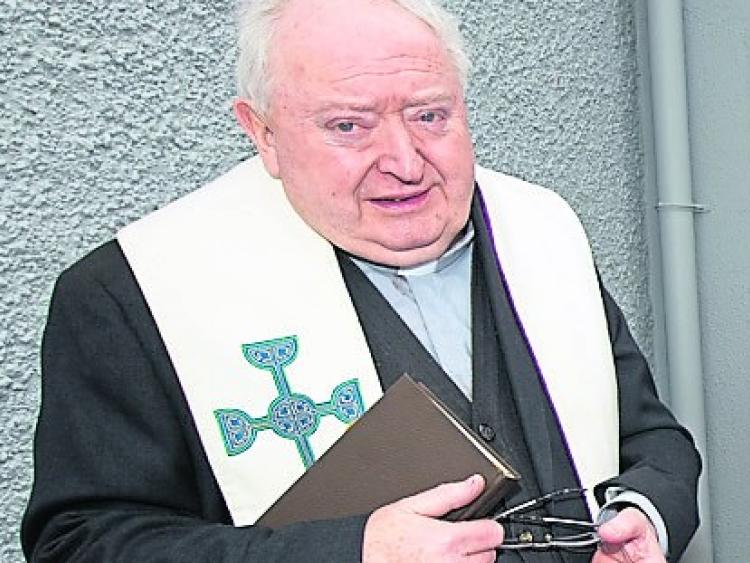 The parish of Camross and beyond mourned the passing of its beloved Parish Priest Fr John Lalor following the announcement on Wednesday night that he had passed away in the care of the staff of St Luke’s Hospital Kilkenny.

Fr Lalor had been ill recently and was a patient first of all in the Midlands Hospital in Portlaoise. Later he was moved to Aut Even in Kilkenny but after a setback he was removed to St Luke’s in Kilkenny where he passed away.

Fr Lalor was 76-years of age and was ordained to the priesthood in 1968.

Fr Lalor came to Camross in 1987 where he was joined by Fr Donal Walsh. He was later appointed PP and served the Parish wonderfully for 33 years. He did enjoy great health for most of his mission under the Slieve Bloom Mountains and he enjoyed his time in the Parish and he certainly won many friends.

Perhaps the real attraction of living in Camross was the fact that he was less than half an hour away from his home land of Durrow and he could visit his relatives, especially his mother, whom he adored until her passing.

Fr Lalor immersed himself in every organisation in Camross, not in an intrusive way, but was always available to give advice especially to younger people. Many improvements were made under his watch - the most recent being the work on Killanure School just to mention one.

Fr Lalor is reposing at his residence beside the Church this Friday and removal will take place to St Fergal’s Church on Friday evening. On Saturday at midday the Bishop of Ossory, Dermot Farrell will concelebrate requiem Mass for the repose of Fr Lalor. Burial will take place in Durrow around 2.15pm.

It had been his wish to be laid to rest beside his parents close to where he grew up.

Chief mourners are his sisters Mary and Anne, brother Gay, brothers-in-law, nieces, nephews, relatives, friends, the Bishop Dermot Farrell and above all his parishoners.