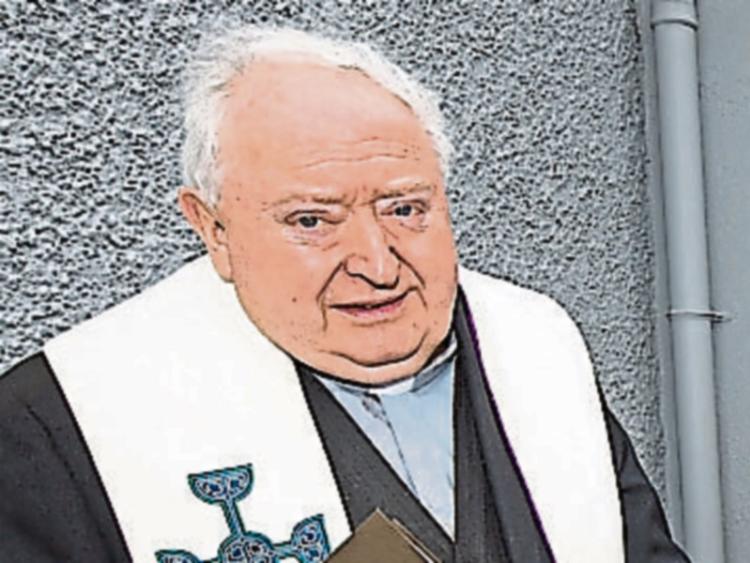 Camross was a sombre place on Saturday February 22.

That was the day that the parish's dearly beloved Parish Priest, Fr John Lalor was laid to rest in his native Durrow following requiem Mass in St Fergal’s Church.

Born in Cullohill in 1943 John Lalor left Durrow and spent his early years in Ballyfin College.

He then then headed back across the county and told his parents he wanted to be a priest.

His mother Veronica was delighted because Durrow had produced many priests and religious people down the years and many were past pupils of St Kieran’s Kilkenny.

June 16 1968 a special day, Laois had qualified for the Leinster football final and in the St Mary's Cathedral Kilkenny many young men were ordained to the Priesthood by the then Bishop Peter Birch.

John was on that team and shortly afterwards he crossed the Irish Sea and made his way up north to Hexham and Newcastle, a big coalmining district and soccer country where the boy from Durrow was the new CC.

It must have been a big change but less than a year later the Bishop called him again and he was thrilled to return to St Canice’s Parish, just around the corner from where he was ordained.

However, a couple of months later he moved to Callan and spent four years there and he also spent time by the Nore in other parishes like Templelorum and Thomastown.

Then the Bishop sent him back across the border and he was thrilled because he had heard of Camross from Fr Lar Dunphy who had spent 11 years there in the late '60s and early '70s.

Fr Lalor began a new era in Camross and the parishoners were very friendly.

Little did he or anyone else realise he would be the longest serving PP ever under the Slieve Blooms.

After five years the Bishop offered him promotion nad he was elevated to PP.

Fr John got work done in double quick time and had a great team around him and the Parish Centre will stand as a monument to him, the two schools and the completion of new building beside the Centre.

He was inspirational in acquiring a new playing pitch by the river.

He was looking forward to its completion and had visions of a seat by the Delour where he could watch the wildlife and wild flowers and listen to the waters rushing down to join the Nore where he grew up.

That was not to be - his health was deteriorating - but Fr John would say, I’ll be fine and many times he was.

However, after a spell in Portlaoise Hospital he returned home but this time he was not feeling the best so he headed to Aut Even.

There his condition deteriorated and on Wednesday, February 19 Fr John was called to his heavenly home.

It was expected but that did not make it any easier.

On Friday hundreds filed past his coffin saying farewell to a much loved priest.

Clergy men of every denomination joined the locals and many who had made the journey from Durrow, and even a visit from a soccer team in Thomastown.

The Mass was celebrated by the Bishop of Ossory Dr Dermot Farrell and joined by over 30 clergy men and a huge crowd.

Fortunately, the forward looking people had arranged for the ceremony to be streamed in the nearby Parish centre.

Fittingly this facility was one of many that the late PP had worked tirelessly to see reach fruition.

People arrived early to ensure a seat for the last farewell to a man they had known as one of their own for 33 years.

The Bishop of Ossory was paying his second visit to Camross.

His first was to join in the celebration of the Fr Lalor's Golden jubilee three years ago.

This would be different and he was joined by many clergy.

Looking after arrangements were Fr Willie Hennessy, Castletown, and Fr Richard Scriven from the Rower.

After the Bishop introduced proceedings he spoke of the sense of sadness that had descended upon the Parish with the passing of Fr John Lalor.

It was understandable because over the years the PP was a neighbour, friend, counsellor and great leader but above all a Parish Priest who had overseen many happy events and sad days as well and h could adapt to any situation.

The Bishop then handed over to Fr Kieran O’Shea who knew the road to Camross because he once served as Curate 19 years ago.

Fr O'Shea was also present when the Golden jubilee celebrations took place in 2018.

He gave a detailed insight into the life and times in Camross as a PP and he knew Fr John loved every minute of his ministry and how he could have retired after the celebrations but there was so much activity and projects in progress and others in the pipeline that he wished to see them completed.

Fr Kieran described how Fr John loved visiting as many houses as possible under his watch and liked to know as much as possible about his flock.

His big curiosity was politics and he loved the arguments and debates.

He also loved the schools and the people who worked there.

He also liked to keep a close watch when building projects were underway. He knew people had given hard earned money and he was anxious to ensure there was no squandering, and he built up a great relationship with contractors.

He oversaw the building of the Parish centre, Camross School and his last major project was the revitalising of Killenure School.

More recently another new construction began right beside the centre.

Fr O’Shea gave a wonderful homily of a man who was destined for greatness from the day he was ordained in Kilkenny, and he had fulfilled that greatness and the parishes he served benefited.

In Camross it worked both ways, Fr Lalor took to life under the Slieve Blooms. He adored the views, and of course the fauna and the flowers were his delight.

He had inherited a great community and if he was great for them they were equally good for him.

After Fr Kieran’s homily Paddy Dooley gave an insight as he can and informed the audience Fr Lalor was the 14th PP of the parish and the longest serving.

Sadie McCartney did the Communion reflection. One verse summed up the man: “You can close your eyes and that he will come back. Or you can open your eyes and see all that he has left.”

Lady of Knock was sung as Fr John was carried out of the Church that he loved and down the steps to begin his last journey to his beloved Durrow.

“Oh your message was unspoken, but the truth in silence lies. So I gaze upon your vision and the truth I try to find. Here I stand with John the preacher and with Joseph by your side and I see the Lamb of God on the altar glorified.”

Outside a guard of honour stretched to Scullys Cross, comprised of Camross Active Retirement, Camross GAA, Camogie, ICA, and Vintage.

All stood in silence, then a handclap as the hearse disappeared over the Delour River and headed through Coolrain, The Pike of Rushall and Ballacolla.

It slowly wound its way across the old river Nore where he caught pinkeens and through the streets where Fr. John played as a boy.

The locals stood in silence as a favourite son came home, the cortege passed by the old homestead then on to Durrow cemetery.

Fr Doherty PP, soon to retire himself, received the remains into the cemetery and said the final prayers and Fr. John was laid to rest beside his parents John and Veronica.

Many locals made the journey from Camross, not wanting to let go.

Chief mourners are his brother Gay, sisters Mary and Anne, brothers-in-law, nieces and nephews, cousins, the Bishop of Ossory Dermot Farrell, and his fellow clergy of all denominations and many friends especially wherever he ministered in Kilkenny and Laois the people of Durrow that produced so many great clergymen down the years but above all the people of Camross.

They will sadly miss his smile and great wit, good humour even in recent times when his health was beginning to fail.

Farewell Fr John and our grateful appreciation of all you did for us.

Be it spiritually or practically you made the achievements of the Parish the envy of others.

One final paragraph sums up the man the people of the Parish loved and adored. May the sod of Durrow rest lightly upon you Canon John.

Fr Lalor words, “we will always look after our own up here. There is a great faith in this parish. It might not be evident every weekend but I know it’s there.”

He was a wonderful leader and adviser to young and old but he might best be summed as one who made up his own mind and stood over anything he believed was right and proper.

We mentioned his huge appetite for politics but there is no doubt had he ever ran for office it would only be as an Independent because he would not be dictated to by anyone.