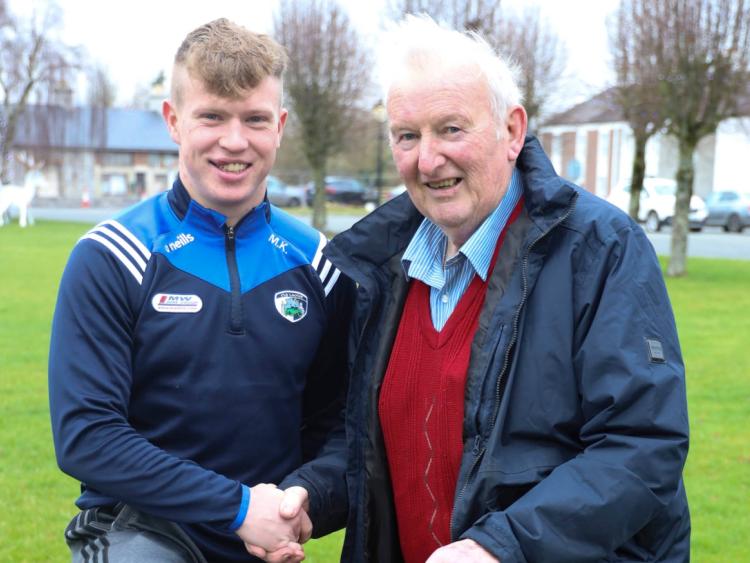 The death has taken place of proud Laois man Johnny Dalton who gave selflessly to the people of Laois over many decades for GAA, community and charity in his native county.

Johnny died after a short illness at his home in Cremorgan, Timahoe in the presence of family on Sunday, January 3.

A native of Colt, Raheen, Johnny was known far and wide for his contribution and his support for Gaelic games at club and inter-county level in and for Laois.

He served in a multitude of positions giving of his time selflessly and unendingly for Laois GAA both helping in the fielding of competitive teams and working in the background on fundraising and organisation.

Johnny gave invaluable service over many years as vice-chairman of the county board and chairman of the fundraising committee. He played a vital role alongside former Chairman Dick Miller in redeveloping O'Moore Park.

He was also to the fore in fundraising for teams down the years and was involved in helping deliver the famous 2003 Leinster Championship which Micko Dwyer helped deliver to Laois.

He was secretary to the 1996 & 97 Laois All-Ireland Minor Gaelic Football champions working closely with Gabriel Lawlor, Ollie Phelan and his good friend Brian Delaney. He later went on to be a selector with a Laois U21 All-Ireland final team.

Because of his dual loyalty to hurling and Gaelic football, Johnny served the county well as Leinster Council delegate for Laois GAA in the country's biggest province. He as also an influential and tireless representative for Laois at the national level in the corridors of power in Croke Park. He never missed an All-Ireland final and was a great help to Laois blow-ins who were looking for tickets to see their native counties in GAA HQ on All-Ireland Final days.

Johnny was also lifelong supporter of Laois teams travelling up and down the country to lend his support from the stands. He was an almost permanent presence in O'Moore Park for games involving Laois. He was also a big servant and fan of the club game attending countless county finals and following Portlaoise and other teams who represented the county after being crowned county champions.

His contribution at county level was matched by his dedication to his adopted Timahoe where he contributed in no small way to the dual hurling and Gaelic football club throughout his life.

His association with Gaelic games in Laois began with his native Colt whom he hurled for as a young man.

"Johnny was a true Gael and a gentleman. He was involved in County Board for a long time and was a great help to every club. When I first joined Laois County Board as Juvenile Football rep Johny was very helpful. He was a great Laois supporter right up to his passing and will be sadly missed around MW Hire O'Moore Park and Timahoe. Johnny was a good friend to me," he said.

Johnny's sporting interests did not stop at Gaelic games. He was a Laois and Leinster table tennis champion but also loved horse racing. Galway, Listowel, Kilbeggan were his favourite festivals but Leopardstown was never missed. He also enjoyed rounds of golf on the fairways of Laois for many years.

Johnny had many more strings in his bow than helping and enjoying sport. He was able to find time to help others in lots of ways big and small. He gave generously of his time to fundraise for the Irish Wheelchair Association, in particular the work of the Laois branch.

His big annual event was the New Year's Day Walk in the environs of Timahoe. Enjoyed by thousands down the years, the event was a true sign of the man's endless generosity and energy and willingness to help others. In later years he teamed up with Maura O'Brien and others to make it a joint fundraiser for the Fatima Pilgrimage fund.

Johnny managed to invite successful Laois people or residents to lead off the walk every year. It was perhaps poignantly appropriate that the man who led the final walk was young Laois hurling star Mark Kavanagh who enjoyed great success in a historic year for Laois GAA in 2019.

Johnny contributed to the community in lots of other ways. When he retired from farming, he took up a position with FÁS which kept him busy and involved in lots of projects, particularly around Portlaoise.

Another big activity was selling vegetables outside his brother George's car garage on the Abbeyleix Road outside Portlaoise. He also delivered his produced to many people who were more friends than customers.

Another interest was politics. Johnny was a loyal but not unquestioning servant to Fianna Fáil for countless years. As with every other job he took on, he was not a hurler on the ditch. Johnny knocked on doors and canvassed for the party at all elections.

One of his proudest efforts was campaigning successfully to help his friend and GAA counterpart Dick Miller get elected to Laois County Council as a Fianna Fáil representative for the Emo Luggacurren Electoral Area.

Dick paid tribute to his friend in a simple but poignant way which reflects the essence of Johnny as a man who was always prepared to give a helping hand.

"He was always a good neighbour who was very obliging," said Dick.

In later years Johnny enjoyed some national fame as a patient/disciple of health and diet guru Dr Eva Orsomond who shot to fame with Operation Transformation. The Timahoe man decided to seek her help to tackle health issues caused by weight problems. As with everything else in his life, Johnny threw himself into the effort and benefited significantly on the health front as a result. His success led to a number of appearances on national TV endorsing Dr Eva's approach.

Alongside all his interests and activities Johnny still had time for family. Married to Catherine, they were parents to the late John and Martina. John died in October while Martina died tragically in 2001.