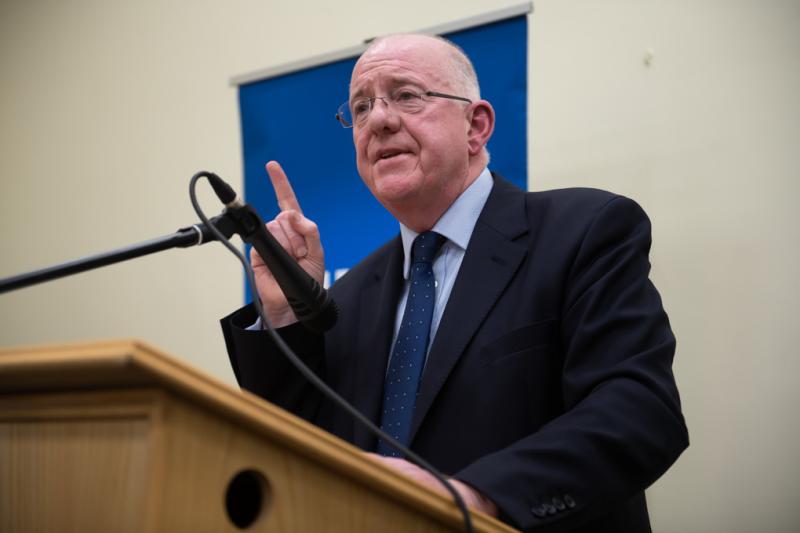 Minister for Justice Charlie Flanagan has said that the Green Party's climate plan would "take us over a cliff edge" while Fianna Fáil is not recognisable as an alternative Government.

Speaking at the launch of Laois Offaly Fine Gael's election campaign in his home town of Mountmellick on Tuesday night January 21, he also hit out at both parties.

"The greatest challenge we are facing along with Brexit over the next five or ten years is climate action. Richard Bruton’s plan is practical, doable, ambitious but realistic," he said.

"The Green Party’s climate action policy to my mind would take us over a cliff edge particularly here in a rural constituency like Laois Offaly where we have our own unique problem with ESB and Bord na Mona moving away from peat and at the same time a 70% target of renewable energy by 2030 remains live and realistic," Minister Flanagan said.

"When you look at the Fianna Fáil front bench if you even know who they are or recognise the alternative government, one thing is clear. They don’t have a plan, they don’t have a policy or solutions," he said.

He did not spare Fianna Fáil.

"A vote for Fianna Fáil or any other party is a vote for a ragbag group within Europe that doesn’t have any idea of the problems facing Ireland much less lending us a sympathetic ear," he said.

Minister Flanagan said that his party as part of the European People's Party "family" gives Ireland a listening ear from powerful European politicians.

"People like Donald Tusk, Jean Claude Junker, Michel Barnier, they in effect are Fine Gael people that we can pick up the phone at any time and talk to them. We could get them to lend their ear to our unique and special problems in Ireland and that job is not yet done," he said.

"Since 2017 146k jobs have been created. That’s good but it’s not enough. We know we have difficulty in housing, in health, I have difficulties in justice, but we are working towards a plan. The important issue we must put to the people is to allow us complete our plan," he said.

"Our chance is to defy the opinion polls, to defy the naysayers because in effect what this election is boiling down to is the question of trust, we know what other parties have done to our county. Giving rise to the catastrophic economic collapse of a decade ago.

"It is a question of trust between Varadkar and Martin, of the record between them, of division between them, and I know which of them my money is on. I’m asking the Irish people to ensure that we return a Fine Gael government in order to ensure our programme commenced four years ago and revitalised now in this election that Irish people young and old, urban and rural, can be united in having a government that will serve their interests," Minister Flanagan said.

Offaly TD Marcella Corcoran Kennedy the other Fine Gael candidate for the constituency also spoke to rally their troops at the launch in the MDA centre. The launch was attended by about 100 supporters from both counties.