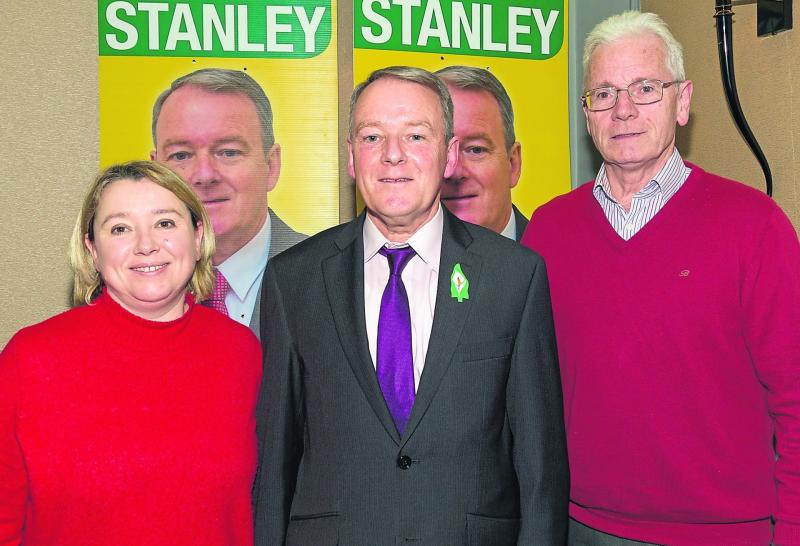 The Fianna Fáil and Fine Gael public and private positions on coalition with Sinn Fein are not necessarily the same, Brian Stanley told his election launch in the Midlands Park Hotel on Tuesday night. Answering a question from the floor on the prospect of coalition, the Sinn Fein candidate told the crowd that some Fianna Fail and Fine Gael members had indicated privately that they would look at coalition, including one Fianna Fáil front bench member.

However, Deputy Stanley qualified Sinn Fein's position on the question of coalition. "We are not scamping around the place or going mad to get into bed with them," he stated.
"We have a clear programme and we are looking for the mainstay of our programme to be implemented," he stated.
"Fianna Fáil propped up Fine Gael and passed budgets that did not nothing for health and housing."

In his launch speech, Deputy Stanley outlined Sinn Féin policy across a raft of areas. He prefaced his speech with the observation that successive governments "had failed to tackle inequality" making Ireland "one of the most unequal societies" in the world.

"We will bring the pension age back to 65, and lower fuel bills. We want a three year rent freeze across both counties. We will also lower childcare costs by €100 a month.

"Portlaoise hospital will not be downgraded under a Sinn Féin government," he vowed.

On climate issues he said that Sinn Féin would invest in renewable energy and create jobs. "We need a renewable energy hub in the midlands and Mount Lucas should be a national training centre for people transitioning from the peat industry."
A carbon tax increase was not the answer in his view. "It places a huge burden on families and we want to give families a break."

"On agriculture, we want to support sustainable farming to plant trees and maintain hedgerows."

Speaking on Brexit and related issues, he noted that it was an economic imperative to start planning for a united Ireland. "We want a 32-county republic of equals. As the only republican party this is our opportunity to move a 32-county country ever closer. Let's use this opportunity, hold our seat here and rebuild where we have to."

Cllr Aidan Mullins extolled party members to do their best for the canvass. "It's two weeks of a hard campaign," he stated.