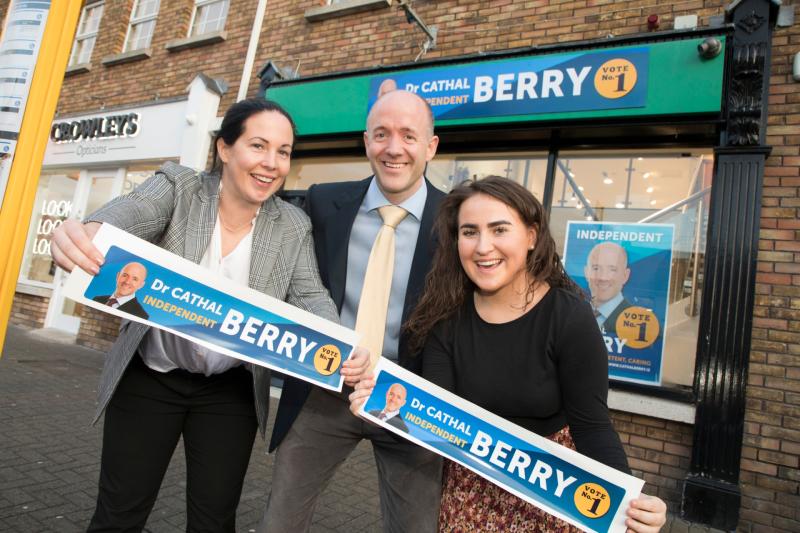 Dr Cathal Berry is a first-time candidate running as an Independent in the upcoming General Election in the four-seat Kildare South constituency which has extended due to the inclusion of an area of Laois and Offaly made up of 12,000 people.

Dr Berry is a doctor and decorated veteran of the Irish Defence Forces (DF) who was based in the Curragh Camp for the last 25 years.

He says his priorities include healthcare, housing, the environment, education and the plight of Defence Force families. Working in the voluntary, private and public sectors, both nationally and internationally, he claims to have established a reputation for honesty and hard work.

Dr Berry says his top priority is healthcare. He says he is uniquely placed to provide insight, guidance, expertise and leadership in the creation of a health service the people of Ireland deserve.

The candidate says he is fully committed to improving the health service and to reducing patient waiting lists. He says he has first-hand, frontline experience of the significant challenges and indeed, frustrations faced by patients and doctors.

Dr Berry says he has always put Ireland first and now, as an army veteran and Doctor, he insists he will continue to dedicate himself to serving others.

He says he served as a soldier in some of the most dangerous regions, protecting some of the world’s most vulnerable people and proving himself to be competent and principled.

He says there are many serving members of the Defence Forces, veterans and military families living and working in the constituency. Dr Berry says he is also committed to investing in the future of the DF, in recognising the unique nature of military service and the benefits it brings to Irish society as a whole.

Dr Berry says he will support Kildare South in "becoming the most vibrant, environmentally conscious and safest constituency in Ireland". He also claims to have the strategic vision, the skills and experience to lay the foundations and take the necessary steps for Ireland to grow, modernise and lead on the world stage.

Dr Berry will officially launch his candidacy in the Keadeen Hotel, Newbridge, Co. Kildare on Thursday 23rd January at 7:30pm.