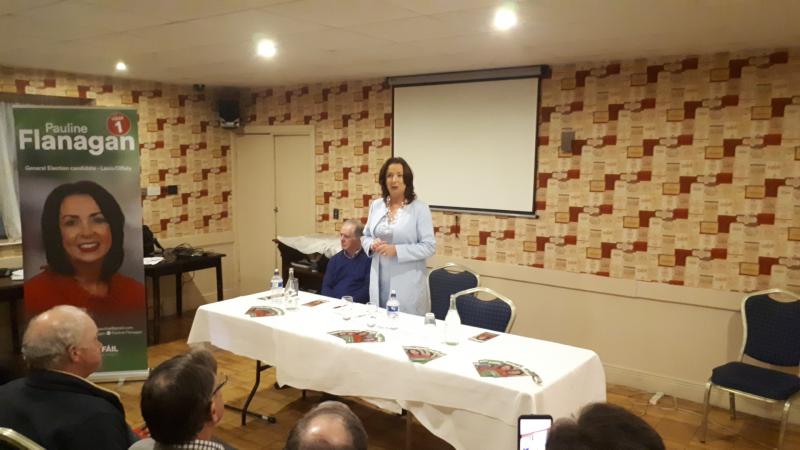 Pauline Flanagan sets out her stall to supporters in Portlaoise

A Laois Offaly Fianna Fáil General Election candidate has warned to her party colleagues that she will not be a means to an end in their campaigns and warned a Fine Gael Minister that she is aiming to replace him in the Dáil.

Pauline Flanagan launched her campaign in Portlaoise on Thursday, January 23 in O'Louglin's Hotel. The former county councillor is running alongside outgoing TDs Seán Fleming and Barry Cowen and Cllr Peter Ormond. Five seats are up for grabs and this is Ms Flanagan's first tilt in a General Election.

"There has also been a reference to maybe my role being that of a sweeper and to sweep up the votes for the other three other candidates to get in.

"Let me be very clear here about one thing. I do a lot of housework and I love it, sometimes, but I can tell you this much I am definitely no sweeper," said the lecturer in IT Carlow.

She highlighted the future of Portlaoise hospital as being a key issue for her. She said she was among the many thousands of 'livid people' who marched for the hospital in 2017. She had a warning for Fine Gael Laois TD about what she hopes to achieve.

"I remember Charlie Flanagan saying I'm your local Minister and I'll do what I can. And what has been done? I am not badmouthing him and I have great times for our local colleague in politics but I have no time for someone who talks the talk but doesn't walk the walk. I can tell you this much. I hope you all realise how important it is to put the right Flanagan in this time," she said.

Ms Flanagan, who lives in Portlaoise, was endorsed at the launch by former GAA President Liam O'Neill.

"We need people who are strong, who say what needs to be said and can take the flack for it," he said.

Mr O'Neill also told the launch that Fianna Fáil had 'got too big for its boots' in the past and needed to return to being the party of the people.

Ms Flanagan said she was absolutely honoured to be a Fianna Fáil candidate.