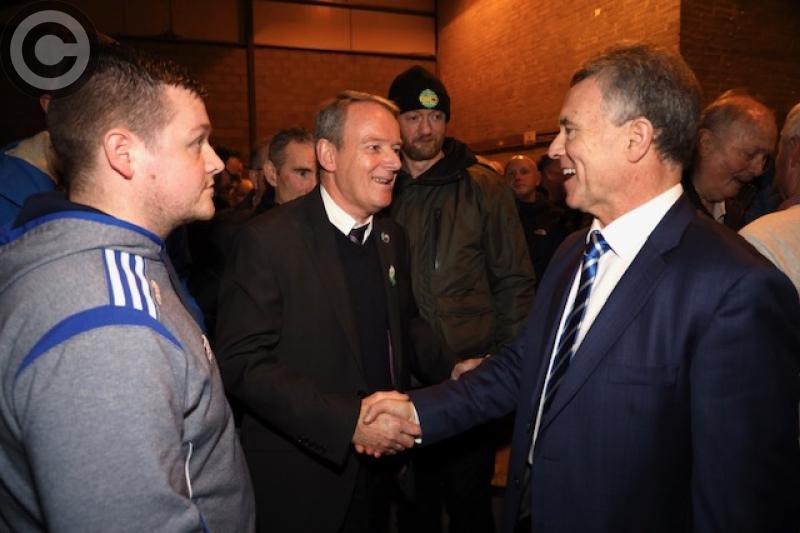 Fine Gael and Sinn Féin should go into Government together, according to incoming Laois Offaly Fianna Fáil TD Sean Fleming.

That was his opinion of the possible Government formation options after the General Election. Mr Fleming felt Fianna Fáil should go into opposition

"My personal prefered option, but I will have to listen and talk to people, is to have Fine Gael and Sinn Féin in Government and have Fianna Fáil lead the opposition," he said.

"I'm saying Sinn Féin have a mandate and they are entitled to have that mandate reflected in Government," he said.

He declined to comment on the possible formation of an SF / FF Government.

"Sinn Féin now need to put into practice a lot of what they have been talking about. I don't know what Fianna Fáil is going to do. It requires a special Ard Fheis for Fianna Fáil to go into coalition.

"The party will make the decision at the end of the day and whatever the majority decision is I will accept that but my preferred view would be that we haven't benefitted from keeping a Government in power for the last few years and I don't think we should be doing that again, " he said.

He said he was delighted that Fianna Fáil had retained its two seats in the constituency and with the highest vote of any political party the two counties.

"Laois Offaly would be one of the smaller number of constituencies in the country where we have held two seats so that is a good result for us. We would all have wished for the third seat but it didn't happen the figures weren't there. There is a crest of the wave coming behind Sinn Féin," he said.

Dep Fleming said there were a number of reasons for the increase in the Sinn Féin support.

"One is that Fine Gael for the last few years but we would have kept them in Government. I think the lesson there is that we kept them in for too long and as a result, we got overly associated in the public mind with Fine Gael and people felt that putting Fianna Fáil in government didn't reflect an adequate change the electorate were looking for so they went elsewhere," he said.

He said Fianna Fáil was "probably right" to support a government being formed after 2016 and stayed in power because of the importance of Brexit.

"However, I will say this, I met thousands of people in the last three and a half and I can say this, categorically, not one person ever mentioned Brexit. Not one ever. It wasn't an issue with people to keep the Government in place over Brexit and they probably felt we shouldn't have kept Fine Gael in for so long," he said.

Dep Fleming also set out his views on possible failings in the Fianna Fáil strategy.

"The Fianna Fáil campaign in Laois Offaly was utterly impeccable. We didn't say a bad word about anybody. We cast no slur on nobody. So locally the campaign was as good as the campaign can be," he said.

As for the national situation, he said he was focused on campaigning on the ground but he did

"The two main parties Fianna Fáil and Fine Gael spent too much time criticising Sinn Féin and that can be counter-productive.  The Irish people like an underdog and they don't like the bigger parties having a go to the extent that they did. Definitely I think it was overdone," he said.

He also commented on his party's grasp of the issue which could have forced voters to change.

"I felt I had a good grasp on the specific issues affecting the people in my constituency but at a national level our campaign was a bit general and it wasn't focused on the specifics...Our overall national manifestos were a little bit vague and not specific enough," he said.

He did not have a firm view on how Micheál Martin led the Fianna Fáil campaign as he was canvassing every night and saw no news or the debates.