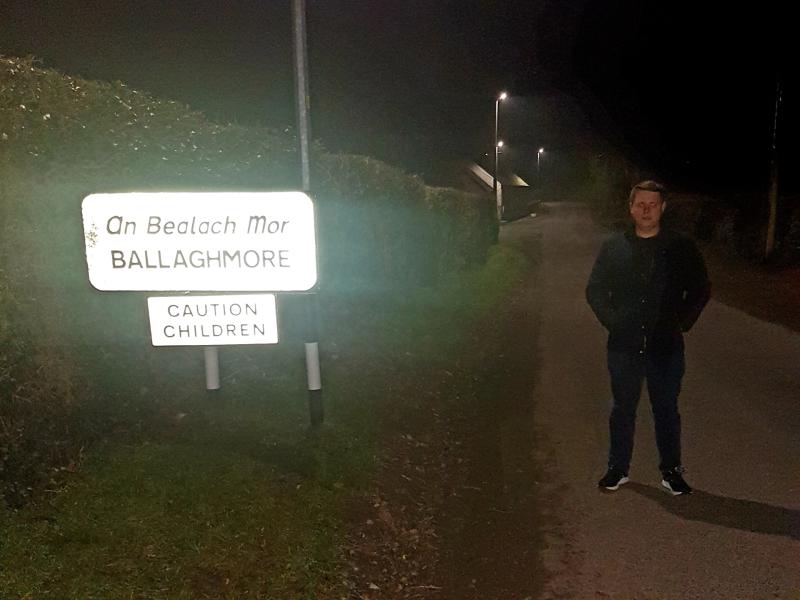 Seven new LED streetlights in Ballaghmore have finally been switched on, having initially been erected by Laois County Council in October 2018 according to Fine Gael Local Election candidate, Conor Bergin.

Confirming progress on the matter, Mr Bergin said, "I am delighted to see that the seven new LED streetlights in Ballaghmore have finally been switched on, having been erected by Laois County Council last October. The lights are located between Kyle GAA pitch and Ballaghmore Gaelscoil and were funded by a €33,750 allocation under the CLÁR scheme to Laois County Council in 2018, supported by the Department of Rural and Community Development.

"A number of local residents had recently expressed their concerns to me regarding the length of time in having the new streetlights switched on. I contacted Laois County Council and ESB networks on this issue and I am pleased to confirm that the lights have now been switched on, as of Monday evening.

"These new streetlights will greatly improve pedestrian safety for people walking in the village and schoolchildren, as well as road safety in Ballaghmore. The lights increase visibility for passing motorists and residents, particularly during the long winter months and will also improve access to the nearby Kyle GAA grounds."

Mr Bergin also added that increased public lighting in rural areas was a particularly important issue which he intends to highlight over the coming months as part of his campaign for the Local Elections in the Borris-In-Ossory/Mountmellick LEA on May 24.