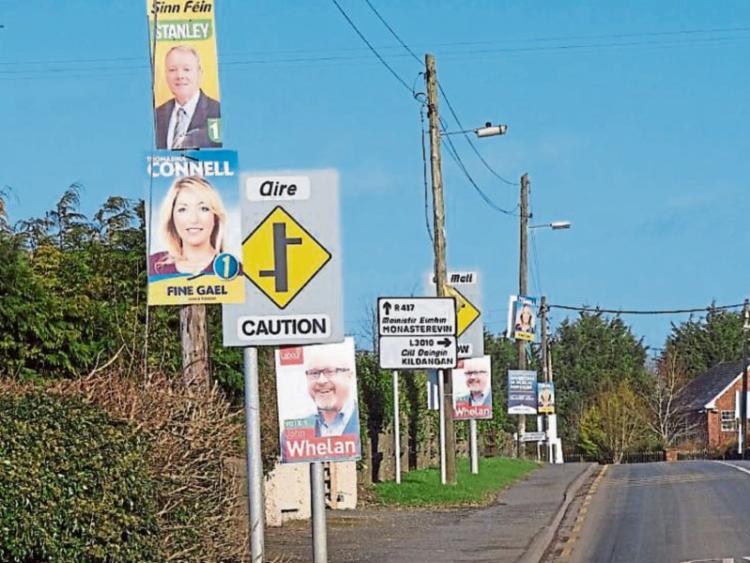 Posters of Laois politicians in 2016

Laois towns could yet be "fleeced with posters" for the May 24 elections, a councillor has said.

While many sitting councillors have promised to comply with requests from Tidy Towns groups not to put up posters inside the town limits, it is legal to erect them, Laois County Council has confirmed.

A national campaign called Posterfree.ie has listed 12 towns in Laois that have requested no posters. They are Abbeyleix, Ballacolla, Ballinakill, Ballyroan, Castletown, Clonaslee, Durrow, Killasmeestia, Mountmellick, Mountrath, Portarlington and Portlaoise.

Fianna Fáil councillor Paddy Bracken is chairperson of the Mountmellick Borris-in-Ossory Municipal District, which held its last meeting before the election this Thursday April 18.

He says he will comply with the requests not to put up his posters in town and village environs, but said others won't.

"Parties at national level will come in with EU candidates, and they will fleece the place with posters. You'll get up some morning and they will have pasted some place," he said.

Councillor James Kelly from Mountrath has vowed to put up his posters anywhere he hasn't been requested not to.

The Independent has only received letters from Durrow and Mountmellick Tidy Towns he said.

"All I got officially was two letters, but I see on social media that 11 groups say they want their area poster free.  If they want this I fully respect that but I haven't been officially informed. I want to know what is the geographical boundary so we know where we can put up posters. In our area we have 14 candidates. There's six here but the other eight can decide to put posters in. If I'm not contacted, I'll be putting up posters," he said.

The informal ban still leaves rural Laois open to a proliferation of election posters, but there will be fines if laws are broken.

Cllr Paddy Bracken says the ESB has written to Fianna Fáil to warn them that any posters on poles will be removed and fines will be issued.

Cllr Brendan Phelan who says he is complying with requests for no posters in towns and villages, reminded colleagues that it is an offence to remove posters, and said all his posters disappeared from poles in a previous election campaign.

Election posters can legally go up from next Wednesday April 24. They must be removed within seven days after the May 24 voting day to avoid fines of €150. It is a criminal offence to interfere or remove a poster, but posters blocking paths, driving signs or drivers line of sight can be removed by a local authority.