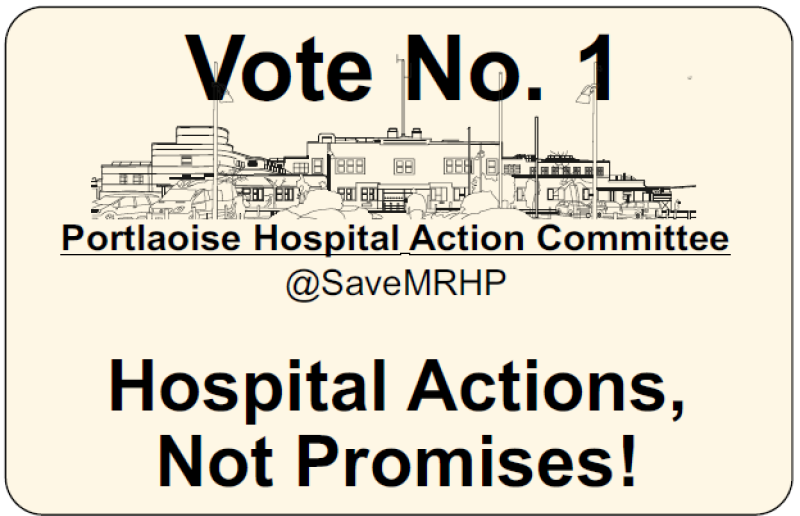 Portlaoise Hospital Action committee will make campaign stickers available in run up to the May elections.

The Portlaoise Hospital Action Committee (PHAC) has called on the public make the future of the Laois hospital their number one issue through raising the heat on candidates ahead of May's election.

The committee has launched what it calls a “Vote No. 1 for Hospital Action, Not Promises!” campaign ahead of next month's vote.

An action committee statement insists that the committee has no political affiliation, nor does it endorse any candidate. While they also do not want Save Midland Regional Hospital Portlaoise (MRPH) campaign being used as an “electoral bargaining chip” they say it should be the number one issue.

“MRHP should be at the top of all candidates’ lobbying priorities,” said the statement.

In their statement, they suggest some “strategic tips” for voters to put the issue at the top of the agenda.
Before candidates canvas on the doorstep, the committee asks people to put campaign stickers on their front doors or cars.

They also want people to display campaign leaflets in workplaces or on community and sports noticeboards.  They want people to visit, write to, email and call sitting councillors and their political party offices.

As for dealing directly with candidates on the doorsteps, the action committee says voters should seek the truth. 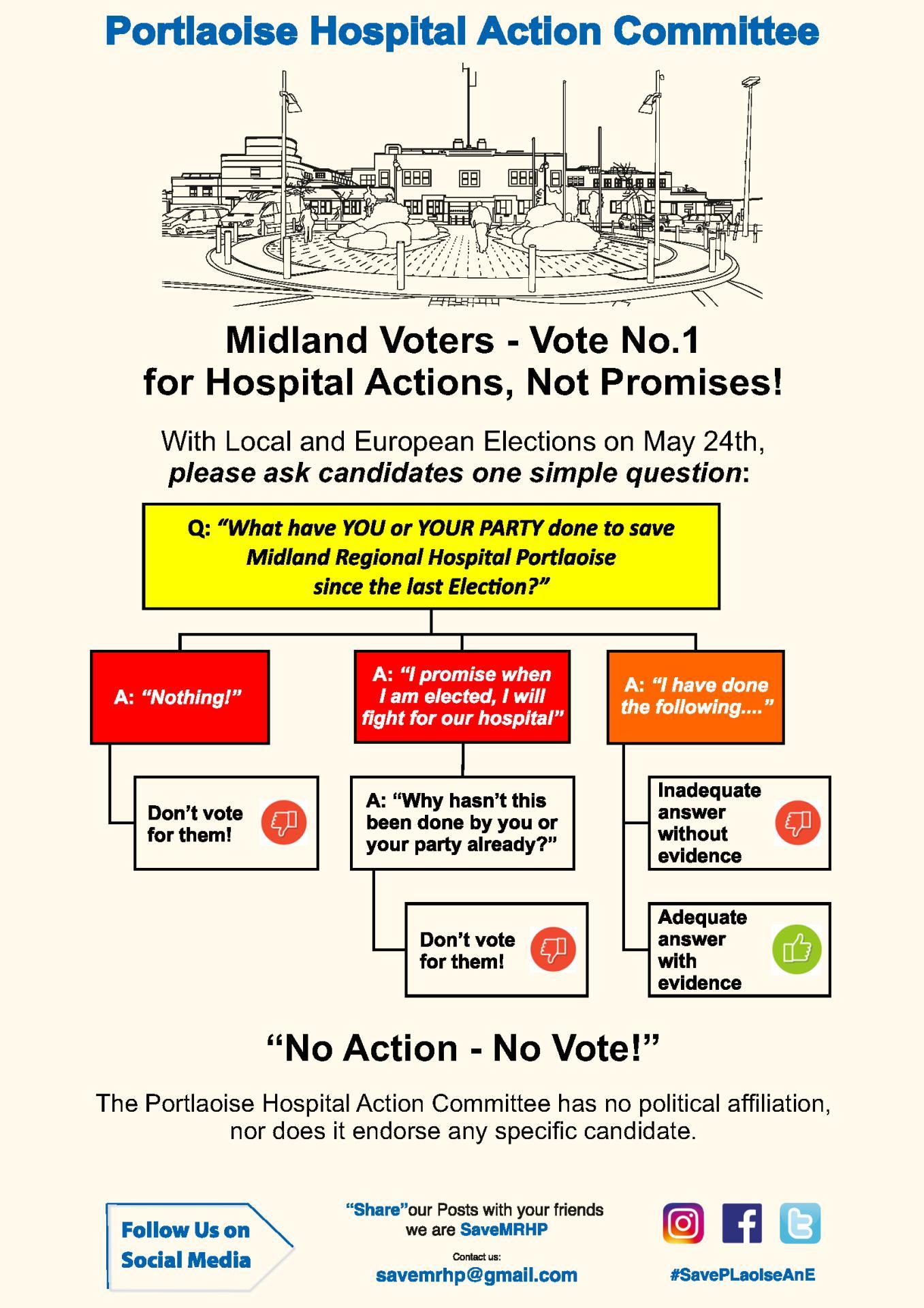 “Candidates should be open and truthful in their communications. It is in a person’s actions, not their words, that their true intentions are revealed. So, make them accountable for what they have not yet done to advocate for MRHP,” says the committee.

They say people can do this by placing the agenda high on the conversation list by asking: "What have you or your party done to save Midland Regional Hospital Portlaoise since the last election?"

“If they cannot adequately answer this question, inform them that you won't be voting for them. If they respond with a promise, that when they are elected, they will fight for our hospital, then ask them: Why didn’t you or your party already do this? Inform them that, if they had done this previously, you may have considered voting for them. If they claim to have done A, B or C, make them accountable by providing you with hard evidence for these claims. Only then should you consider voting for them,” says the campaign.

The group says representatives with decision-making power have a special responsibility to be accountable to the people who voted for them. 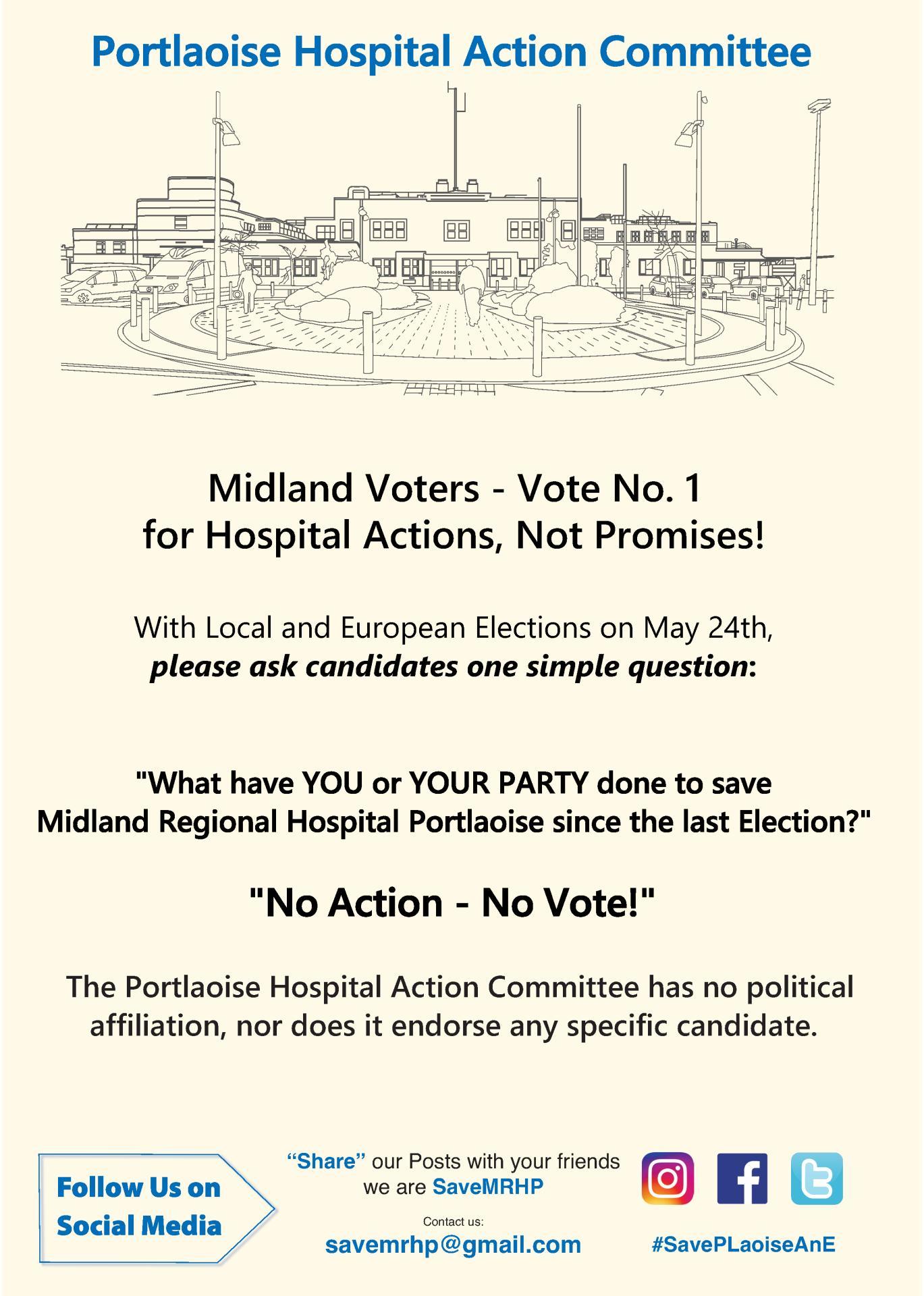 People are urged not to accept claims that they do not have the power to act in relation to the hospital.

"Whether and how they use this power for the good of MRHP is their choice. Remind them of past broken promises committed by them and the party whose line they have potentially toed,” said the group.

The public is urged to remember that people power prevented a downgrade.

“Use your lobbying power now to prompt tangible action targets for candidates’ campaign...Leave candidates with the crystal clear understanding that unless you are presented with evidence of action on their part ‘during’ the election run-up, then you and yours will not be voting for them or their party. This may prompt action,” it says.