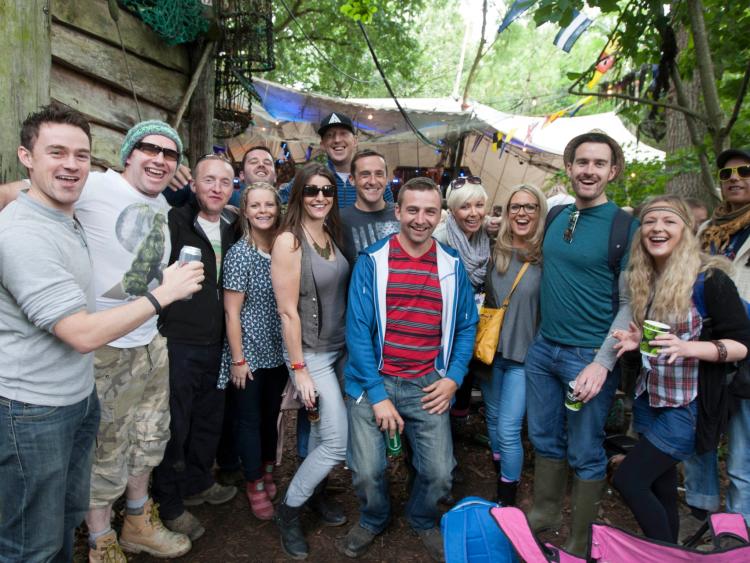 When the 40-tonne Punk-Lady of the Sea, The Salty Dog, first docked in the woods in Stradbally for Electric Picnic, she gave her decks over to a life of shame and disgrace.

Her Captain, a reckless and strawberry-nosed layabout with a weakness for the dogs, press-ganged passing minstrels into service and hawked bootleg hooch to anyone pausing to check their phone: before long, she became a refuge for thousands of lost fools clutching tinnies.

A campaign got underway to see that she might be returned to the port she called home. Realising his annual rum supply might go up in smoke, the Captain 'felt it was important to put safety first' and directed that the port should be moved to the ship (wreck) instead.

This September, to mark the 10th -ish anniversary, The Salty Dog will find itself centrepiece to a bustling and grimy port - a whole new two-storey structure hewn from stolen timber and given a lick of paint - and populated with the kind of seedy low-lives that make ports all over the world a little short on scruples and long on mischief.

Hustlers selling eye-patches (buy one, get one free); tricksters duping the innocent with three cards and a barrel; a blood-spattered surgery for limb removal and replacement; a market for dried haddocks with no sell-by-date; a reclamation yard of other unwanted seaside junk; The String and Door is the festival's first dental service; The Hot Poker is a uncredited portside VD clinic; 'Shiver Me Timbers' will be a red-light troupe involving some waggling of booty to the fiddle and tin whistle; a beardy cast of hags and growlers will mend fishing nets, smoke fish, swig porter and pickpocket passers-by.

Purveyors of bawdy theatre and a grimy dose of portside commerce will complete the streetscape, to the sound of unkempt souls croaking sea shanties to no one in particular. And that is just the harbour.

The Salty Dog herself will welcome its finest ever line-up to her decks, including a big welcome back for the Hot Sprockets, a maiden voyage for folk melodians Corner Boy, melodious favourites Otherkin, the two best brass collectives in Ireland Stomptown Brass and Booka Brass Band, Galwegian crazy boys My Fellow Sponges, a blast of electronica from Rian Trench's new outfit Deborah and the spell-binding electronica outfit The Innocent Bystander, young lunatics No Monster Club, breath-taking Smithsonians These Charming Men, spoken word anarchist Jinx Lennon, David Kitt in his only festival appearance as David Kitt, a new project from Mick Pyro and Pete Pamf called Shogunz of Skank, a party night with the eponymous The Pale, some humming Jamaican beats form Gangsta Ska, and from all-girl The Skatuesques. Nix Moon, Square Pegs, Good Strangers, Paddy Hanna, Columbia Mills, The Roadhouse Doors, Leila Jane and the Healers.

And in The Captains back pocket this year? Brand new music from rappers Rocstrong, loud experimental duo Bicurious, and just wait till you hear the stunning performance of British indie folk master DD Allen. Stowaways, the lot.

Now nestled in the clutches of its very own harbour, the Salty Dog is going to mark 2017 in style. Not high style; lowly, grizzly, shabby and squalid style. And we will all be there feeling very at home.