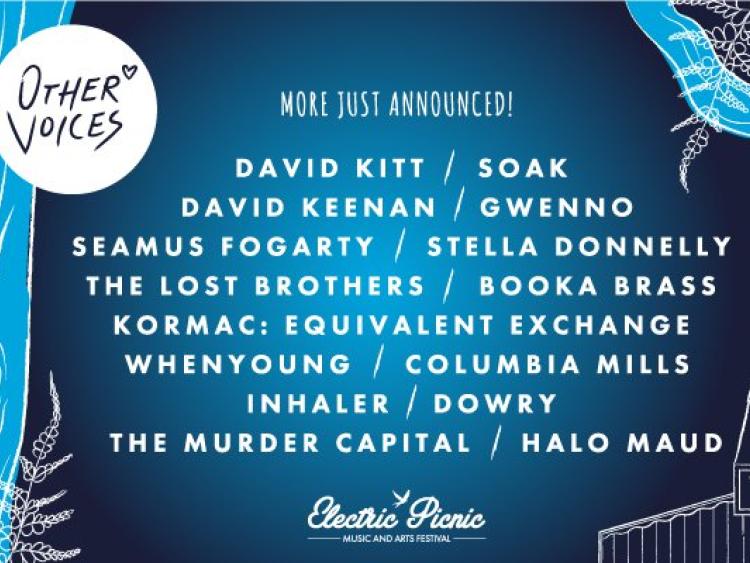 Expect the unexpected, magical performances from friends old and new, songs for the head and the heart…

This September, Other Voices will return to the heart of Electric Picnic’s woodland area for three days of music.

In keeping with the ethos of Other Voices, festival-goers can expect memorable, intimate, engaging performances from Irish and international artists. Picture a multi-dimensional musical spectrum that will fill you with delight and inspiration. The Other Voices stage will be presented by Huw Stephens (BBC 1) and May Kay.

Check out the legends who are joining us at @EPfestival this year!
We're counting down the days now. See you all in a few weeks #EP2018 pic.twitter.com/tfMX1xx79D

DAVID KEENAN is a 23 year old Irish songwriter. An obsession with words and melody took hold of David at a very early age. Exposed to the writings of Behan, Yeats and Wilde with the soundtrack of Dylan, Buckley and The Dubliners illuminating his formative years. David has played alongside the likes of Mick Flannery, Hothouse Flowers, Damien Dempsey and Glen Hansard and is fast becoming one of Ireland's most talked about young artists.

SEAMUS FOGARTY grew up in Co. Mayo in the west of Ireland and spent his early years writing songs about mountains that steal t-shirts, women who look like dinosaurs and various other unfortunate incidents. In 2017, he released his second album ‘The Curious Hand’ which received a 5-star review in The Guardian, alongside great reviews in Mojo, Q, Uncut, Irish Times and Hot Press amongst others. Seamus will be bringing his unique sound home to Mayo for Other Voices Ballina in September but first we get a taste of him here at Electric Picnic

INHALER formed in 2016 when all four members, Ryan McMahon (drums), Josh Jenkinson (lead guitar), Robert Keating (bass) and Elijah Hewson (vocals/guitar) were still in Transition Year. Playing original material inspired by the likes of Joy Division and Echo and the Bunnymen, they played their first gig in the Grand Social in Dublin, and have moved on to play other venues in the area such as the Workman’s Club and the Button Factory a number of times. Their first single 'I Want You' was released in January of 2017 and a B-side 'She's my girl?' (Demo) was released following the single being uploaded onto streaming platforms.  After a slightly dodgy encounter with the Leaving Certificate, 'The Inhalers' have planned a number of gigs for the coming months and are in the process of recording more music to be released very soon.

HALO MAUD is the creation of Paris based Maud Nadal. Halo Maud writes and records songs that combine dream-pop sensibility and swirling-synth psychedelia, while singing in both English and French. Maud brings her unique style to Other Voices Electric Picnic for her debut performance in Ireland hot on the heels of the release of her debut album ‘Je Suis Une Île’.

THE LOST BROTHERS (Oisin Leech from Navan and Mark McCausland from Omagh) have been on a non-stop world tour, taking in sold-out theatre shows in Ireland and the UK, a stint in America, and their first Australian tour. Their new album ‘Halfway Towards A Healing’ was recorded between Sligo and Tucson Arizona. We are delighted that they will now travel to Electric Picnic to make their Live debut on the Other Voices stage

COLUMBIA MILLS describe themselves as "Joy Division playing the Grand Ole Opry". Their live performances are emotionally charged and the combination of live instruments and electronic elements make for an all-encompassing show. Columbia Mills joined us on the Music Trail in Dingle in 2017 and now it’s their time to take to join us in the woods in Stradbally.

KORMAC: EQUIVALENT EXCHANGE is a brand new show by leading Irish producer, DJ and composer, Kormac with The Irish Chamber Orchestra and an array of special guests. Kormac debuted the show in March 2018 to a sold out Vicar Street with show visuals designed by leading Irish artist, Maser. It was the closing show of the St. Patrick’s Day Festival and it will close the Other Voices stage for us this year at Electric Picnic.

We are delighted to announce that SOAK will make her long-awaited return to Other Voices at Electric Picnic 2018. SOAK [Rough Trade] is one of the most fascinating artists to emerge from Northern Ireland in recent years. Her debut record ‘Before We Forgot How to Dream’ was described as ‘a vivid portrait of teenage deep-thinking' by The Guardian and was awarded the Choice Music Prize Album of the Year award when SOAK was just 19. SOAK will perform music from her highly anticipated forthcoming record at Other Voices stage, tucked away in the Stradbally Woods.

Welsh artist GWENNO will join us for her debut Other Voices performance. Her first record ‘Y Dydd Olaf (The Final Day)’, was a concept album based on Welsh writer Owain Owain’s 1976 sci-fi novel of the same name, in which robots take over the human race. It was described as “one of the best British debuts of 2015” by Pitchfork. Her most recent release ‘Le Kov (The Place of Memory’) is a beautiful and stirring record, swirling with ancient myths and urgent modern thems, recorded in Cornish.

STELLA DONNELLY will join us at Electric Picnic all the way from Australia. Stella’s brutally honest and witty observations of people and relationships are transformed into blissful poems and lyrical punch lines on her standout debut EP ‘Thrush Metal’. Donnelly’s relatable way of writing is her lens to the world in which we live, a glimpse into what it’s like to be a millennial woman in the age of Trump, Tinder and third wave feminism.

WHENYOUNG are Aoife Power, Niall Burns and Andrew Flood. Their story started in Limerick, when the three teenagers met for the first time after sneaking into Costello’s Tavern: the only bar in town that floated their musical tastes. After bonding over The Velvet Underground, they began playing music together and moved to Dublin. Developing their sound, still with a DIY approach, the band moved to London in 2017 and became whenyoung.

DOWRY is the recent solo project of artist, multi-instrumentalist and composer, Éna Brennan. Since moving to Dublin from Brussels nearly 10 years ago she has obtained an MPhil in Composition from Trinity College Dublin and collaborated with a vast array of artists, be it as a composer, arranger or violinist, weaving in between many layers of the Irish music scene. Only a year into her solo project she already has a long list of gigs to her name including performances at Electric Picnic and Sounds From A Safe Harbour, and she has been noted as one to watch in 2018 by The Thin Air, State.ie and Whelan’s.

Over the last few years musical guests at Other Voices Electric Picnic have included Hozier, Villagers, St. Vincent, Julia Jacklin, Annie Mac, The Staves, Glen Hansard, East India Youth and many, many more. We’ll have several very special guest slots at Electric Picnic 2018 which will be revealed during the festival…. Keep an eye out!

Other Voices (www.othervoices.ie) started as a one-off music event in a small Dingle church and over the last 14 years the idea has grown.

Other Voices is now an established fixture in the musical calendar - a ‘must attend’ event for performers and audiences alike.

It has led to the creation of an international music TV series and the filming of that series subsequently became a music festival, a tourism event in its own right that celebrates the local on a global scale.

While the stellar quality of the music at Other Voices continues to reach ever higher levels, it is a constantly evolving and innovating force in the world of music events and cultural tourism, constantly exploring and experimenting multi-dimensionally across content programming, event formats and distribution channels.